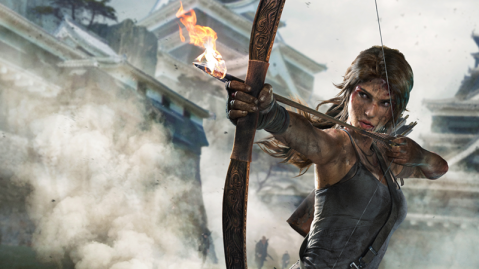 Did Tomb Raider really need a ‘Definitive Edition’? This was my first thought upon announcement, but I went out and bought it, so maybe it did. “But what makes this version ‘Definitive’?”, I hear you ask. Well Lara has a nicer face and a better ponytail, that’s what makes it definitive.

Has it been a year since I first played Tomb Raider on an old console as an uglier Lara Croft? Almost. The game certainly feels familiar, although I don’t necessarily want to criticise it too much for a lack of extra content, as at no point does Tomb Raider pretend to be anything other than what it is. Sure there’s an extra tomb and some new maps for the game’s terrible multiplayer, but at its heart this is last year’s game with a graphical overhaul. Nothing more, nothing less.

But that’s not to say it isn’t an improvement, and I personally felt that the performance boost added quite a bit to the experience. The game didn’t run so well on my PS3 as, like many games from the last couple of years, it pushed the console to the absolute limit. On PS4 it runs flawlessly, and also handles a bunch of graphical upgrades that make the game look better than ever. This includes new particle and lighting effects that even give it an edge over the original PC version (which is a relief considering it’s around five times the cost). Lara also has a new face (did I mention?) as another added bonus. 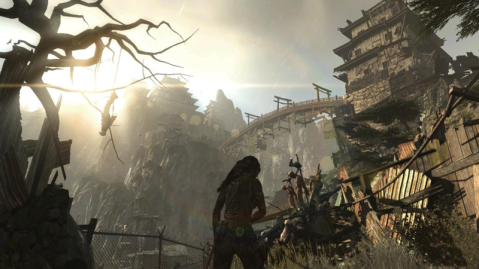 For those who missed out on the original non-definitive version, Tomb Raider is an easy recommendation, especially considering it’s currently one of only a handful of great next-gen games. However it’s not flawless, and all of the problems I found last time around are still present. The story still sucks thanks to a terrible support cast, some dodgy accents, and a laughable moment when all the characters you’d forgotten about show up locked inside a big cage. The game is also too linear, which I usually don’t mind, but when there should be an emphasis on exploration, discovery, and tomb raiding (as the title would suggest) it feels restrictive. There are too many scripted sections where Lara is falling, rolling, sliding and QTEing her way through trouble, and these quickly start to feel familiar and uninspired. Whilst we’re constantly shown Lara in danger, this never translates into the actual gameplay, and the concept of her being super vulnerable stops the second you’re given control, at which point you’re slaughtering bad guys and jumping huge chasms. You’ve also got a kick ass bow which is still fun to use, and helps reminds us that this game once belonged to that weird bit around late 2012/early 2013 when a bow and arrow was super cool and people only liked games if you could hunt wild animals in them.

Anyway, this time last year I’d have probably written a more critical review of Tomb Raider, as by the time I’d reached the game’s final (and fairly dismal) section, its linear nature and shift towards the supernatural had started to annoy me. But a boost in the graphics department really adds to the games immersion, especially considering that looks are one of the game’s best, and most important elements. The atmosphere is also heightened thanks to some smart use of the PlayStation 4’s light bar and controller microphone, which add subtle effects that really draw you into the experience.

These features aren’t present on the Xbox One version of the game, which apparently only runs at 30fps (uh oh). To be honest I’m not really sure how much of  a difference this makes, but as the main point of the definitive version is that it looks better, I can understand why many would consider the PS4 version of the game to be superior.

Overall I’m relatively surprised I had this much fun with Tomb Raider the second time around. This emphasises the fact that it is a good game, and I’m sure that many of its problems are likely to bug others less than they bugged me. If you can overlook a couple of painfully poor Northern accents then you’ve got a stunning looking game that is also, for the most part, a lot of fun to play.

Other games from around late 2013/early 2013 where a bow and arrow was super cool: Crysis 3, Assassin’s Creed III, Far Cry 3