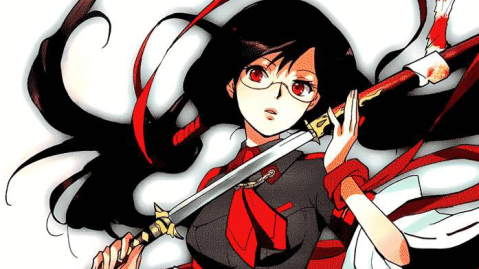 Highschool drama by day, beast-slaying action epic by night, Blood-C is an anime that mixes together contrasting genres. But instead of providing something for everyone, it presents such a variation of ideas that few are likely to enjoy all the show has to offer. You’ll have to be a certain type of person to like Blood-C, and whilst I appreciate that it wont be to everyone’s taste, I can’t deny that it’s exactly my kind of anime.

As an action/horror series Blood-C delivers. Protagonist Saya is tasked with protecting her village from vicious beasts known as the Elder Barins, and this results in intense fight scenes that are visually stunning. And don’t let the school comedy stuff fool you, whilst this is a show that isn’t afraid to be lighthearted, it’s also one that isn’t afraid to be undeniably brutal and immensely gory. It’s hard to believe when you’re watching Saya debate which of her classmates she fancies, but Blood-C really does present its violence with a remarkable level of competence.

Unfortunately, if you’re here for the thrills then the tedious school antics are likely to put you off (and likewise, if you’re here for the antics then the thrills are likely to leave you disturbed). You’ll need to be able to stomach both of these elements to fully enjoy the show, and if you like the sound of a school comedy that turns sour then Blood-C wont disappoint. 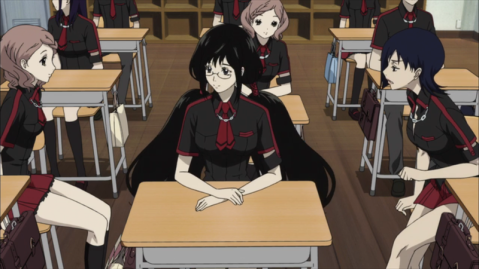 But it’s not until the last few episodes that Blood-C really defines itself as a masterpiece (or if you didn’t like the first episodes then this is probably the bit where you stop hating it quite as much), and there’s a real sense of momentum as it builds up to a wonderfully twisted ending. (The final episode is particularly great, and ends on a brilliant line of dialogue). There’s also a really huge twist that I won’t say too much about, and some great meta humour that openly acknowledges many of the earlier episode’s flaws.

Whilst the show has a dramatic and well rounded ending, it still finishes on a cliffhanger, allowing it to flow effectively into Blood-C: The Last Dark, a movie that concludes the story. Whilst the set up is intriguing, the film itself is a little one-dimensional, and I found it didn’t build on many of the themes that made the anime great. There’s also a heavy focus on new characters, whilst those recurring have disappointingly small roles. A few exciting moments and some stunning animation helps partially redeem The Last Dark, although it is unlikely to truly satisfy anyone who enjoyed the show. On the plus side, its different setting and new characters define the film as its own entity, so watching it didn’t make me like Blood-C any less, or feel like it now ended on an unsatisfactory note.

If want too see beautiful CLAMP characters getting eaten by monsters, interspersed with some predictable Highschool shenanigans and less predictable plot twists, then Blood-C is the show for you. It’s ambitious, uncompromising, and like all the best things in life, it isn’t for everyone.