Did somebody say ‘Dystopian Future’? Ah, the very words get me excited, and the premise of Psycho-Pass is certainly intriguing. Potential criminals used as hunting dogs to track down mentally insane criminals? In the future? Well, you’ve got my attention.

At the heart of Psycho-Pass is a simple premise; ‘What if someone’s mental state could be actively measured and given a definitive value?’ This assessment, known as a Psycho-Pass, is initially shown as a tool primarily used to help capture criminals, and to stop potential criminals before any actual crime has been committed (a bit like in Minority Report). As the show progresses the impact this technology has had on society is expanded on, with more and more revelations leading to the ultimate realisation that living in a dystopian society might actually not be a good thing after all.

The show itself follows a police unit made up of ‘Inspectors’, who hunt down criminals aided by ‘Enforcers’, latent criminals who’s Crime Coefficient (probability of committing a crime) is considered too high. Main character Akane Tsunemori begins as a new inspector, justifying the story’s need to explain is detail how all this futuristic criminal capturing business works, but by the show’s second half she develops into a competent lead, with the main storyline challenging her strong sense of morality and justice.

The rest of the cast is a little more forgettable, and main-boy-character Shinya Kogami feels particularly underdeveloped. Everyone else in the unit exists with minimum purpose, and those unlucky enough not to have their backstory explored in the show’s first half remain enigmas, as infinitely more exciting storylines about chasing serial killers and firing futuristic weaponry at them takes over. 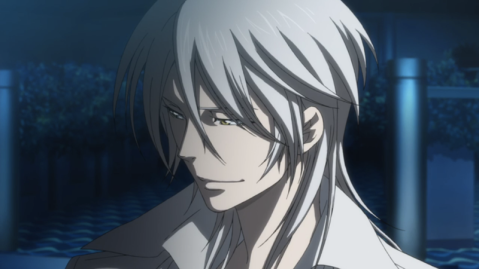 Antagonist Shogo Makishima is fairly entertaining, and after his initial introduction at the start of the show he subtly lulls away in the darkness for a few of the earlier episodes before taking centre stage. He brings with him some interesting enough philosophy and a twisted sense of right and wrong, and the show’s structure helps optimise his role. Unfortunately he ultimately suffers from Psycho-Passes greatest weakness; a lack of uniqueness and originality.

Sure, he’s kinda cool. But he also feels like he was grafted out of Death Note. Like Light, L and maybe even a bit of Near were all mashed together and absolutely nothing was changed regarding either looks or personality. It worked whilst I was watching, as he was interesting in the same way those characters were (apart from Near obviously), but certainly didn’t leave a lasting impression.

This is backed up by a generic visual look, and whilst the animation quality is generally impressive (aside from the same panning shot of the H.Q that is repeatedly used) it doesn’t do anything you wouldn’t expect from a modern anime, and does nothing to set itself apart from any other show.

Did I enjoy Psycho-Pass? Yes. In fact, there are few anime I’ve enjoyed this much that I’d also criticise this heavily. It’s structurally superb, well written, entertaining and interesting. Yet something is missing. It’s lacking the spark that makes a great show brilliant. It makes less mistakes than (say) Death Note or Steins;Gate, but both are infinitely superior. I know this is a harsh comparison, I could write a pretty long list of things that are ‘not as good as Steins;Gate’.