I love Fez. I loved Fez on the Xbox 360 and now I love it on PS4. I’ve got so many good things to say about this game that I’m worried it’s gunna sound sarcastic. I think Phil Fish is an exceptionally talented game designer and that Fez is an outright masterpiece. No sarcasm, no ‘but…’, I really mean it. I love Fez. 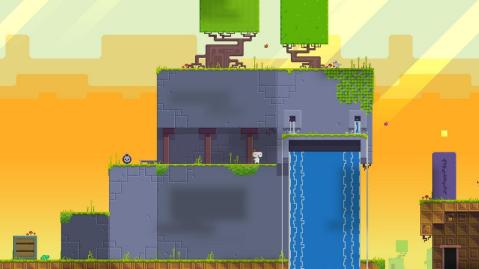 Back when Fez came out on the Xbox 360 there’s a good chance you could have picked up the game without really knowing the story behind it (I know I did). Now (in 2014) this is a little harder, and after everything that’s happened since its release (Fish’s refusal to patch the game on XBLA, Fez II being cancelled and Fish leaving the videogames industry, Indie Game the something-or-other) it’s potentially quite difficult to approach the game with an open mind. Fez is the work of an eccentric genius, and playing it is like looking at a Van Gogh painting knowing that one day the man who made it would go and hack his own ear off. 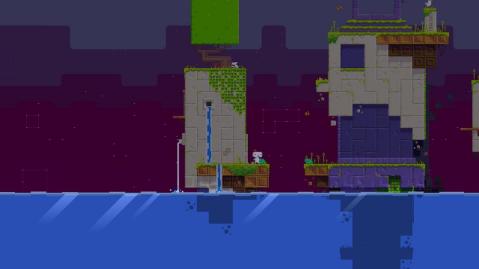 Yet somehow, all of the game’s notoriety seems to fade into the background every time I play it, and I’m always surprised by how easy it is to lose myself in Fez’s intimate and personal world. This is what attracted so much attention to the game in the first place, and in five, ten years time, this will be what it is remembered for.

The crux of Fez lies in exploration. It really starts and ends here. You explore, collect cubes, and have fun. There’s an interesting rotating mechanic in play that allows you to swivel your perspective on the world, which exists in 3D but can only be navigated in 2D. This is perfectly executed and allows for some striking visual effects, but the mechanic alone isn’t what makes Fez fun. Instead it adds to the element of exploration by turning each level into its own navigational puzzle. This gives the world a sense of secrecy and mystery, as it can be traversed in a number of different ways and explored from four different points of view.

There’s something else that adds to that sense of secrecy too. Actual secrets. Fez doesn’t just make exploring fun, it rewards you for it, and uncovering everything in the game is an immense and unforgettable challenge. Throughout my playthough I found myself taking notes, drawing diagrams, downloading a QR scanner and attempting to learn a new language. Alongside innovative puzzles, Fez repeatedly breaks the fourth wall, and pushes absolutely every limit regarding what can be achieved from a videogame.

It’s even got a good story. Whilst Fez might not be The Great Gatsby (or insert your own favourite book title here, whatever) it does have a charming sense of humour, and its unintrusive narrative is subtle and enjoyable.

Then there’s the soundtrack. Potentially my favourite element of Fez, although what’s essentially so great about it is how well it characterises the game and adds to the overall experience. In Indie Game the Movie, Fish cites Mario, Zelda and Tetris as major influences on Fez, and it’s clear to see why (run and jump platformer with maps inside treasure chests, bombs that blow up cracked walls, actual Tetris blocks in the sky ect.) but what’s not mentioned is that all these games have something in common; iconic soundtracks. Of course Fish didn’t create the soundtrack himself (a bit like how Shigeru Miyamoto didn’t compose the Super Mario Bros. theme) and credit must be given to Disasterpeace for the way they have perfectly captured the atmosphere and feel of the game.

On PlayStation 4 (which I guess is the system I’m reviewing on, although everything I’ve said is still relevant on other platforms) the game plays exactly like the Xbox 360 original, with the only difference being that it now supports Cross Buy and Cross Save. This is a small, yet great addition; Cross Save works perfectly and the game runs flawlessly on the PS Vita. Usually I’d recommend the portable version of a game because of the added flexibility, but not this time, and in my oppinion the best way to enjoy Fez is on a massive TV with the sound turned up. 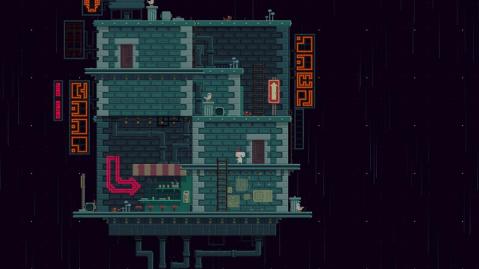 Did I say anything bad about Fez? I hope not, if I ever do I don’t mean it. Fez is a masterpiece full of creative and innovative ideas. At its heart is a beautiful handcrafted world that is truly a joy to explore. The fact that two people made this game is mind blowing. No wonder it took them so long. As Shigeru Miyamoto once said, ‘A delayed game is eventually good, a bad game is bad forever’.