Time travel has always been an intriguing concept, but it’s also a mechanically tricky and inherently cliché idea that is very rarely as exciting as it should be. Often used without any real though, some of it’s most well known applications in film, television and literature are remarkably haphazard, and the plot holes generated as a result are problematic. 5bp’s Magnum Opus does not approach it’s subject matter lightly, and the result is scientifically believable, narratively sound, and emotionally riveting. It’s time to open the Steins;Gate!

When Steins;Gate begins, Rintarō Okabe is a surprisingly annoying main character. The self proclaimed ‘mad scientist’ has a weirdness I’m sure many viewers will initially have to overlook, and his strange ramblings are completely bizarre. A few episodes in and I found myself warming to him not because this was dialled down, but rather because he was starting to change. This is a show where things never stay the same, and as new characters are introduced the group dynamic changes. Trying to build a time machine effects the cast in the way it should. Experimenting with it takes an emotional toll, and traveling through time is essentially a descent into madness.

This is by far Steins;Gate’s greatest strength, but it’s not the only thing that makes it such a memorable show. The first ten or so episodes may seem a little slow in comparison to what follows, but they are an entirely necessary (and still entertaining) introduction to the world of time travel. Turning a microwave into a time machine isn’t easy, and the entire process, as well as the actual mechanics of jumping world lines, is documented well. Here is where Steins;Gate get’s the edge over something like The Girl Who Leapt Through Time. Both are emotionally powerful, but Steins;Gate’s rules of time travel are detailed, and incredibly convincing.

Once this has been established, Steins;Gate crosses a clear point of no return, and sets an unbelievable pace that is retained throughout the show’s second half. The tension builds, character relationships intensify, and everything is concluded in a satisfying and well thought out ending. This is followed by an entertaining OVA/epilogue episode that is also enjoyable.

Whilst this makes for a near perfect experience, there are a couple of small flaws that really bug me about the show. The first is what happens with Okabe’s landlord, who towards the end of the season does something extremely out of character. His actions are never resolved or explained, and ultimately feel like an unnecessary and rather strange attempt to increase the tension before the show’s final conclusion. I know it’s nothing major, like say what happens near the end of Death Note, but for some reason it annoys me more. It just shouldn’t have happened, and this frustrates me.

There’s also a couple of uninteresting side characters, but these are minor flaws when the quality of the main storyline is so high. Steins;Gate starts good and just gets better with each episode. It matches science and romance in a seemingly impossible way, and has some of the coolest applications of time travel in anything I’ve ever seen.

Also watch: The Girl Who Leapt Through Time 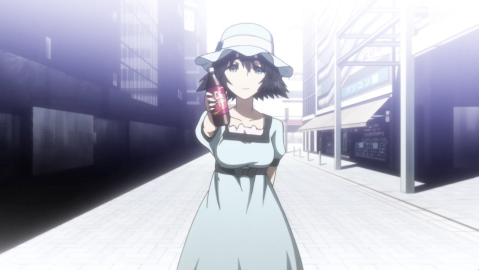