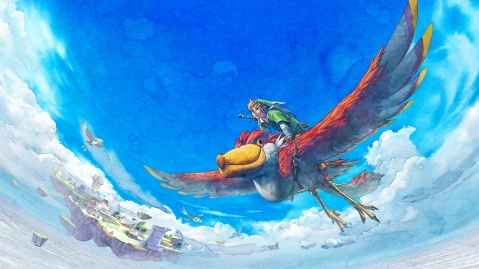 Skyward Sword follows on Nintendo’s tradition of releasing an epic Zelda game in the twilight years of a console they appeared to have forgotten about. Two years on and I can say with certainty that this was the last great game for the Nintendo Wii, and it’s hopefully what the console will be remembered for, rather than the mass grave full of shovelware it had to climb out of to get here.

Skyward Sword is one of the few Nintendo Wii games that doesn’t feel like it could have just come out on the GameCube, and this is because it fully embraces everything the Wii was built for. This is as close to 1:1 motion control as you’re going to get on the console, and it’s a shame the novelty of waving a Wiimote around like a sword ran out about five years before it was done right.

Of course Red Steel 2 proved that decent motion controls alone don’t make for a fun game. The game’s undoing was poor level design, but thankfully this is one of Skyward Swords strongest areas. And honestly, this is the most important thing. Especially for me as I’m left handed, so control wise these games are a bitch to play. 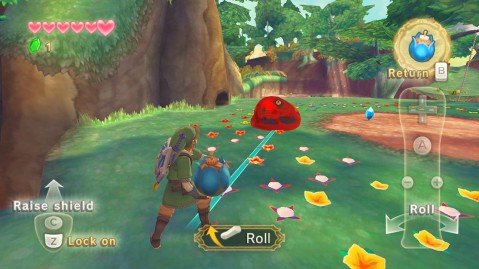 Link’s journey takes him through a truly beautiful world, split between floating islands in the sky, and the surface world below. The sky feels very much like Wind Waker’s ‘The Great Sea’, but you travel by bird instead of boat (and the islands are floating). Meanwhile the surface world is more reminiscent of Ocarina’s Hyrule, resulting in a Zelda game that feels very much like the best of both worlds (no pun intended). The premise will be familiar to Zelda fans, but there’s enough fine tuning and originality to deem the game more the ‘Majora’s Mask’ type, rather than simply ‘Ocarina of Time but different’.

There’s plenty here that hasn’t been seen before including flying birds, a unique combat system and, err, ‘dousing’. Traditional elements such as the dungeons have been tweaked too and the result is a game that’s much more fun to play, and many of the frustrating elements of past games in the series have all but vanished.

And then there’s the stylised graphics. I must admit, when I first saw Skyward Sword I didn’t think it looked great. It certainly looks like a Wii game. It does however have a real charm to it, and whilst I honestly thing the game could have been run on a GameCube, it has such artistic flare that it’s still going to capture the imagination of future generations of gamers, where as contemporary ‘realistic’ games (you know the ones I mean) will have long since been outdone and forgotten. My other main issue is with the great big ugly image of a Wiimote running up the right hand side of the screen. This can be turned off in the options. Problem solved.

With a great soundtrack, a control system that works, and tighter dungeon design, it’s clear to see how Skyward Sword is one of the best Zelda games ever made. It’s certainly built to last, and embraces everything that’s good about the series whilst removing some of its frustrating ‘quirks’. This is a brilliant and magical game that fully realises the Wii’s capabilities, and in doing so concludes Nintendo’s original vision. 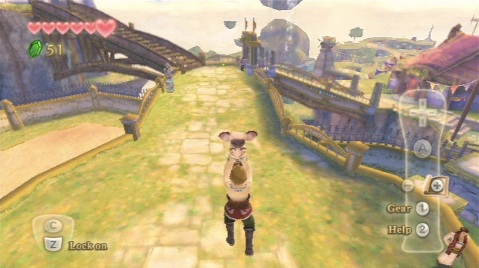