Killzone: Mercenary follows on from a long string of games that have unsuccessfully attempted to bring console quality gameplay to Sony’s PlayStation Vita. The first person shooter genre has become particularly notorious for failing to translate, and Nihilistic Software (who were responsible for a bad Resistance game and an even worse Call of Duty) are likely to have tainted the expectations of anyone who played either of these two titles. How does Killzone handle the downsize? In three words? Better than most. 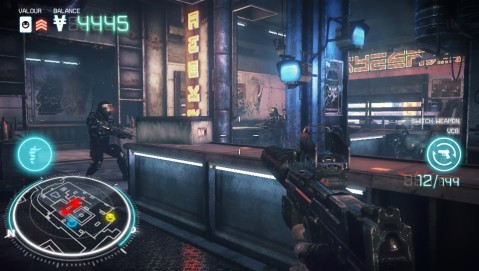 Taking a series away from it’s original developer is usually a risky business. It’s a bit like taking a screaming infant away from it’s loving parents, obviously the child grows up to be evil because it was raised by a cruel adopted family that didn’t feed it enough. Such has been the case for about half the Vita exclusives so far, but thankfully Killzone: Mercenary joins Little Big Planet Vita to become the two kids that turned out alright despite their traumatic upbringings.

Maybe it’s the because Killzone games on the home consoles just aren’t that good to begin with. They’re all overhyped and look great until they are actually released, at which point they’re quite good for a few weeks but are never looked back on fondly. On the other had you know what is a great game? MediEvil on PlayStation 1. That was made by Sony’s Cambridge studio. You know what else they made? Killzone: Mercenary.

Graphically Killzone: Mercenary sets itself apart instantly from the console’s other shooters, and it’s up there with Wipeout and Little Big Planet as one of the best looking games on PS Vita. However, several of the problems I remember encountering on Resistance: Burning Skies are still present. The PS Vita may have two analogue sticks, but they’re much smaller than those found on a console controller. With a game that requires a lot of precision (like say, a FPS) aiming can be very difficult, and it requires a bit of getting use to. The solution Killzone: Mercenary employs is to make the sticks much less sensitive, and for me personally the default values felt very unnatural. You have the same option Uncharted: Golden Abyss has to use the PS Vita’s gyroscope for precision aiming, and this does help a lot for those long range head shots. However, this again is very insensitive and even when these values were maxed out I had to wave the console about when I’d rather have been tilting it slightly. 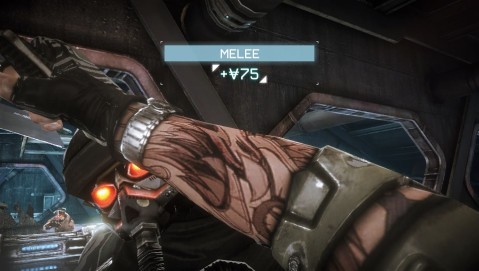 The game has a good, if slightly flawed story mode. I personally found it was most fun to play stealthily, and there’s a great unlock system that caters for this well. Not only does this remove many of the issues regarding precision aiming, but it also works with the game’s seriously overpowered melee attack. Pushing triangle when you’re near an enemy pretty much results in an instant kill, you do admittedly have to swipe in a direction, but this is extremely easy, and then you can watch your character brutally stab any enemy in the head. It’s the same kind of thing you can do to enemies in other games when you sneak up on them from behind, only this time you can do it at any angle and from a bit further away.

The game’s storyline is barely worth mentioning. It’s not bad, but it’s certainly not interesting. You’re characters talk about making money, a lot, and whilst actually making money from doing small tasks during gameplay is fun, hearing your characters talk about how they’re trying to get rich, isn’t. But you wouldn’t buy a game called Killzone: Mercenary for it’s storyline, right? 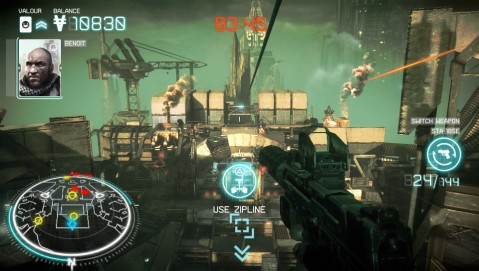 Of course you wouldn’t! You’d buy it so you can shoot things. Shoot things all day. Shoot things in the car until you’re travel sick. Or on a plane till you’re jet lagged. At work when the boss isn’t looking, or whilst watching something really mindless on the TV. And that’s what’s great about Killzone: Mercenary; it’s awesome to play on the go. It might not be as cinematic as Killzone 3, but I’ve already played it more because it’s on a handheld and I can enjoy it wherever. It’s a fun game for a system that just got one step closer towards having a suitable amount of great exclusives. Subtract one point if you think you already have enough awesome PS Vita games.