Wipeout: Omega Collection is the remaster of a remaster, and much of the content goes all the way back to the good ol’ days of the PSP. There’s tracks here I’ve now played through in four different iterations of the franchise, but the fact that there’s now a Wipeout game on PlayStation 4 is certainly nothing to complain about – especially considering that Studio Liverpool closed back in 2012. Although familiar, Wipeout: Omega Collection delivers a further level of refinement to an already masterful series, and that’s pretty great.

The total offering of the Omega Collection is three separate content packs; Wipeout HD, the ‘HD Fury’ expansion pack, and Wipeout 2048 – the 2012 PS Vita release. The HD/Fury campaigns were also released as DLC for the Vita game, and in turn took their content from the Wipeout Pure and Wipeout Pulse games for the PSP, being remastered in ‘HD’ originally for the PS3.

This does indeed mean that Wipeout: Omega Collection is partially composed of content that’s been released three times previously. Oh, Wipeout Pulse also got ported to the PS2, so four times – let’s not forget that one. As someone who’s played through every incarnation of the Wipeout content I have mixed feelings about them being repeatedly recycled, and whilst it’s surprisingly fun to look out for the minute differences in Omega Collection, it’s also a shame when opportunities are missed to diversify the experience. 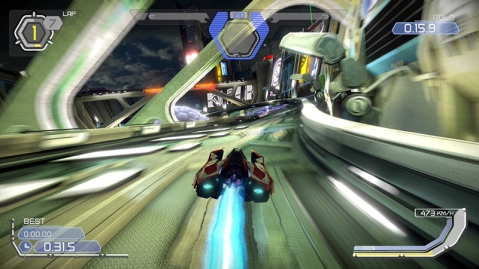 The Omega Collection is primarily a graphical and audio enhancement over the original titles. This extends beyond the much-promoted 4K output and into further visual refinements that ensures HD/Fury looks as good as it’s ever done, and 2048 is brought up to standard with improved graphical fidelity and twice as many frames-per-second as the Vita original.

Meanwhile the improved sound design may just be the game’s strongest component. Striking audio and visual aesthetic has been a key component of the Wipeout games since the days of The Designers Republic, and it’s fantastic to hear the series sounding as good as it’s ever done. The soundtrack blends together old favourites with some well-chosen new additions, and the sound effects are infectious, immersive and maybe even a little hypnotic. The mechanics themselves further encourage a zen-like state, but it’s those soothing and robotic voices – y’know, the ones that go ‘ROCKETS, MISSILE, MINES… Autopilot Engaged’ – that induce the Wipeout-trance.

With the 2048 content making its console debut, this could arguably be seen the most exciting part of the collection. But although nice to look at, the Vita game’s campaign doesn’t integrate all that well with HD/Fury. Those two complement each other nicely – with the main difference being that Fury experiments with some more wacky and imaginative game modes – but 2048 has a completely different structure and as a result doesn’t quite fit. It’s structurally more concise and emphasises shorter game types, with the tracks themselves being less defined. This contrasts with the varied and more abstract courses on offer in the HD and Fury packs.

This isn’t necessarily a bad thing, and 2048 is still a really strong game, but I’d have loved to see new games types, events and even a campaign structured around unifying the content into a single, consistent experience. Instead, Wipeout: Omega Collection gets away with repackaging an existing experience on the grounds that the existing experience is really very good. Wipeout remains a timeless classic, and it’s great to know that Sony’s most enduring racing series isn’t quite dead yet.