This week I bought a Japanese Xbox 360 and a selection of import games. Most of these are made by CAVE, who specialise in manic shooters and have ported their arcade classics to the console. With few of their titles making their way out of Japan, and many enforcing a region lockout, their library is perhaps the main reason for purchasing a Japanese system. Today I will look at the advantages and disadvantages of importing, as well as some of the games doing so will give you access to.

Buying an import Xbox 360 isn’t as fun, cheap, and easy as it should be. Here in the UK the console is still fairly expensive in the shops, with the 250GB slim model currently costing around £159.99 new; that’s only £40 less than what I purchased mine for on the day it came out four years ago. A new Japanese system costs more than this, and they can be imported from Play-Asia (here) for just under £200. This already isn’t cheap, and you’re likely to incur further import charges upon arrival (I have with everything I’ve ordered from them).

I turned to eBay in the hope of finding a console for sale that was already in the United Kingdom, and if you’re interested in buying one yourself it’s worth a shot to begin your search locally. I had no luck, and even looking worldwide found a distinct lack of Japanese Xbox 360s for sale. In particular I was looking for a second hand console so I’d have more money left for games.

I ended up purchasing my system from the USA for £150 including shipping. I then had to pay another £30 in customs so it wasn’t the best deal in the world, although at least it came with a game. The only significantly cheaper alternative method of importing I’ve found is to purchase from Japan and have the item shipped via surface mail. This option is available on many auctions for the original Xbox 360 models, and if you don’t mind having a larger, uglier, and less reliable system then you can get one for around £100. The other downside is that surface mail takes around three months delivery time, so it also depends on how long you’re willing to wait.

Once you’ve got your hands on a console, setting it up and enjoying the games is a pretty smooth process. Remember that annoying power brick that connects your console to the mains? Well now it’s your best friend, as an internal PSU would be nowhere near as easy to replace. All you need is a power supply from your own region and you’re good to go. That means no bulky adapters or voltage converters that make weird humming noises when they’re left plugged in.

The system language can then be permanently set to English, which is a first for any Japanese console I’ve owned. Also it will work perfectly with any existing Xbox Live account, and whilst you won’t be able to download anything from the Japanese Xbox Live Marketplace, you can access content from your own region, play online, and download update patches for your games. 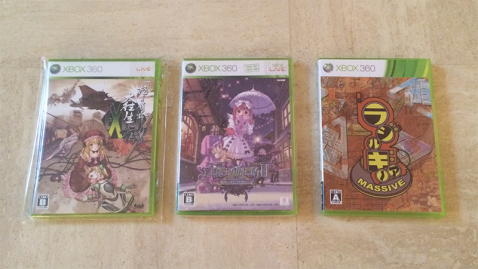 So here’s the main reason anyone would even consider importing an Xbox 360; the region locked games. Owning a Japanese console means you can play Japanese games, including exclusive titles never released internationally. Most of the good ones are made by CAVE, and you’ll really need to have a taste for bullet hell shooters if your purchase is going to be worthwhile. Bear in mind that these days the majority of Japanese games that would appeal to a western audience are localised, and as the PlayStation 3 is region free anything multi-platform can be played on Sony’s console.

Out of the thirteen CAVE games released for the Xbox 360 only one is also available on PS3 (Ketsui). Three have been localised and four more are region free. That’s eight in total that can be enjoyed without the need for an import system.

I will be buying more in the future, but for now I’ve only got four region locked games; DoDonPachi DaiOuJou (left) Deathsmiles II (middle), Radirgy Noa Massive (right) and Phantom Breaker (not pictured). Admittedly the last two aren’t made by CAVE, Radirgy Noa stands out as a mechanically inferior shmup. However it’s still fun, and I’d been wanting to play the Xbox 360 version for a while.

As a big fan of the original Deathsmiles I was really looking forward to its region locked sequel, although overall the game isn’t as enjoyable as the first title. Also, if you have a US Xbox Live account the game can be downloaded through the Games on Demand service.

DoDonPachi DaiOuJou stands out by far as being the best region locked game I currently own, as well as one of the best bullet hell shooters I’ve played. Visually it’s got more of a retro feel to it than the other DoDonPachi games for the Xbox 360, and it was originally ported to PS2 first, but in terms of gameplay it’s about as intense as the series gets, with bullets flying across the screen in unimaginably intricate and diverse patterns. Whilst certainly an easy recommendation, it’s worth knowing that 5pb originally took a few ‘shortcuts’ making the game and it shipped with several significant bugs. There’s a 4mb patch that sorts all this out, but if for whatever reason you can’t connect your console to the internet then you’ll be in trouble!

There’s a few region locked CAVE games I’m currently missing from my collection, but in the meantime I’ve got a few of their region free releases to keep me busy. In particular I purchased the limited edition version of DoDonPachi SaiDaiOuJou (left), the final game in the series and sequel to DoDonPachi Resurrection, as I couldn’t resist its immense artwork. Unfortunately gameplay wise it’s probably the most lacking in the DoDonPachi series, and whilst it’s not bad I’d recommend checking out the other games first.

Then there’s ESPgaluda II (middle) and Mushihimesama Futari Ver 1.5 (right), both games are really good and if you shop around they can be bought for under £30 each. If you’ve got an original model Xbox 360 you might be tempted by the limited edition version of ESPgaluda II that comes with a faceplate for your console. However be warned; this version is not region free! It’s easy to spot though as it has different cover art.

If you’re new the Xbox 360’s library of bullet hell shooters then the best place to start is with the three games released internationally; DoDonPachi Resurection (left), Deathsmiles (middle) and Akai Katana (right). Whilst the language barrier isn’t really an issue as the imports contain minimum text (and half of it is in English anyway), the English games are unbeatable when it comes to value for money. Not only are the Japanese titles usually produced in small quantities, but the games aren’t discounted in the same way older titles are abroad. Finally you’ve got international postage which is usually factored into the price of the game.

It’s also perhaps worth knowing that these games are region locked the other way around, and won’t work on a Japanese system. This is annoying as the a lot of English games are region free, so you almost wouldn’t need an English console any more, but then you’d be missing out on three great CAVE titles. Admittedly there are Japanese versions of these games, but these have less modes and are more expensive.

Overall importing a Japanese Xbox 360 is a pretty serious luxury, and only something I’d recommend to hardcore CAVE fans and people who enjoy really obscure games. For those getting into the bullet hell genre the English games are a good place to start, followed by the region free releases. I should also point out that I was in the market for an additional Xbox 360 anyway – and I also use it for playing English games (most of which are region free) meaning the purchase wasn’t quite as excessive as it may seem.