Deathsmiles is a manic shooter made by CAVE; the undeniable masters of the genre. It takes many of the concepts found in their DoDonPachi series but instead of space ships and tanks you have a cast Gothic Lolita girls fighting evil demons with magic. Sure, it may be a little ‘Japanese’ for some, but underneath the weirdness (which you may actually quite like) you have an incredibly addictive, rewarding, and well made game designed to push you to your limits.

Anyone familiar with CAVE’s other games, or similar titles such as Radiant Silvergun and Ikaruga, probably knows that whoever added the word ‘manic’ in front of the term ‘shooter’ really wasn’t kidding. In Deathsmiles the colour of death is purple. On the easier difficulty settings this means wave after wave of purple bullets spewing from your enemies in methodical attack formations. On the harder modes we’re talking pure chaos, and the entire screen is continuously filled up by a sea of purple, leaving only pixel-wide gaps between the bullets for you to weave through.

Gameplay wise this is pure entertainment; it’s involving, intense, and a spectacle to look at. Whilst ‘not dying’ ranges from hard to very hard, the game is easy to get into thanks to the default settings allowing for infinite continues. For those new to the genre it may be a little surprising, but you will be seeing the end credits in not long over half an hour, regardless of how much you suck at the game. Of course this is simply how the genre works, and although you wouldn’t be wrong to consider Deathsmiles an Xbox 360 exclusive (and no other version of the game contains the same selection of modes) it is also an arcade port, and its structure reflects this. 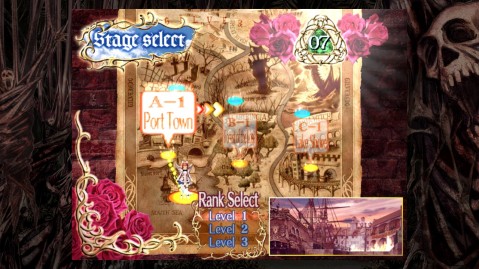 Fortunately Deathsmiles has a substantial set of modes, multiple characters, difficulties, endings and a tonne of challenges to keep you playing again and again. It’s also an excellent example of how achievements can be effectively incorporated to help extend the lifespan of a game. Sure, a few of them are too easy (pause the game), and a few are too hard (complete the game on Level 999 without getting hit once), but somewhere in the middle is a well-thought-out checklist of all things you can (and should) be doing in Deathsmiles.

With so much in place to help you get into the game, Deathsmiles offers a great starting point for the genre. The art direction is also superb, the soundtrack is great, and the bosses all have silly names. If you weren’t already convinced, imagine how much fun you’ll have rocking out to a symphony by Bach and fighting a demon dinosaur called ‘Tyrannosatan’.

Whilst many of Deathsmiles’ features are staples for the genre, there are also few unique mechanics in play. In particular you have the ability to shoot in two directions, giving you more freedom when choosing how to evade large quantities of bullets and destroy handfuls of enemies at the same time. This feature helps the game stand out as superior to CAVE’s other horizontal shooter on the Xbox 360; Akai Katana.

The selection of modes on offer is also impressive. The main attraction is Xbox 360 mode, which includes enhanced graphics from the arcades. You’ve also got the original, alongside the updated Mega Black Label version of the game which includes an additional character, stage and the ridiculously difficult Level 999 option. Then there’s version 1.1, which assigns your characters familiar (magical animal that accompanies them) to the right analogue stick, offering a completely new way to play the game. You’ve also got the arcade originals so you can see what the game looked like before its makeover.

Whilst the high price tag may have initially put a lot of gamers off Deathsmiles, the title has since come down in cost drastically. Okay, I know there are plenty of other great Xbox 360 games available for under £10 so I shouldn’t single Deathsmiles out too much, but as you can now buy all three of CAVE’s western-released games (Deathsmiles, DoDonPachi Ressurection and Akai Katana) for little over £20, any complaints regarding value for money are now fairly redundant.

An awesome style and large selection of modes defines Deathsmiles as an incredibly well made game, however it’s the balance between easy-to-pick-up and impossible-to-master that makes it a shmup perfect for new and returning fans of the genre. Its perfectly implemented difficulty curve not only lets you get comfortable with the game’s systems at your own pace, but places the 1cc (one credit clear) challenge just the right distance out of reach.

Going after this made me want to break things, but it also resulted in a more involving and more intense experience than pretty much any other genre can achieve. When I finally completed it I’d been playing for four hours straight, I was seeing purple bullets when I closed my eyes, and my heart was still racing from the final boss fight (Tyrannosatan didn’t seem so funny this time around).

It’s here Deathsmiles is at its most rewarding, and there’s even greater challenges that remain for the true pros. Thanks to a well crafted set-up it’s easy to get into, and the game does an excellent job of tempting you to push your limits. And once you’re hooked you’ll realise that dodging those little purple bullets is not only intense, but it’s also pure fun.

One response to “Review: Deathsmiles”