Last Sunday I went to EGX, the UK’s biggest videogame show. As someone who likes videogames quite a lot I enjoyed this chance to play all the ones that aren’t out yet, and after a few days recovering from all the free energy drinks I’m just about ready to recount my experience in full.

There was a lot to see and do at EXG, and a single day was without a doubt not long enough to cover it all. Games such as Star Wars Battlefront 3 and Mirrors Edge had huge queues I didn’t dare face, especially as I needed the time to play every Nintendo game they had on offer.

The last game show I went to was Game Stars Live at London ExCel in 2004, and eleven years later the videogame convention hasn’t changed as much as you’d imagine. Halo now has a five after it instead of a two, but the best way to promote it is still to have a dude dressed up as the Master Chief. Meanwhile Nintendo has a sequel to Mario Tennis, although it’s not too far removed from the GameCube version I played last time.

On both occasions Nintendo’s section of the show floor was the most impressive. At Game Stars Live this was an enclosed area dubbed the ‘Nintendo Pier’, inside which you could play Donkey Konga, Metroid Prime 2, The Legend of Zelda: The Minish Cap and more. This time there was a surprisingly large selection of games on offer, including a few that are already out such as Super Mario Maker and Splatoon, as well as upcoming titles like The Legend of Zelda: Triforce Heroes, Xenoblade Chronicles X, Animal Crossing: Happy Home Designer and Chibi–Robo! Zip Lash.

But the main attraction was undoubtedly StarFox Zero, which was presented complete with banners and a long queue. Whilst the demo level was ultimately fun, it did turn out to be worryingly similar to the first stage from just about every previous StarFox game before it. Whilst Nintendo’s approach of repeatedly remaking the same game has resulted in a refined experience, it was still an overly familiar one.

By the end of level boss I’d clearly got a little complacent, and in rushing to try and beat it before my accompanying friend I ended up flying the Arwing into it head on and meeting a fiery death, effectively ending the demo a few minutes early, whilst he – having never played StarFox in his life – completed it smoothly.

What stood out most was that when we’d reached the front of the queue the woman running the demos apologised to us, saying we’d be waiting a little longer due to the fact that the person in front was so bad at the game. He was in the process of playing through an extra training level and was looking at the Wii U GamePad as if he was extremely afraid of it. The woman pointed at him, looked back at us and said “he’s a real amateur y’know”.

On Animal Crossing: Happy Home Designer I caused more trouble for myself by impatiently skipping though most of what Isabelle said at the start of the demo. Before I knew what had happened I was in the process of renovating an office space when all I wanted to do was explore the town. I put a heart shaped rug on the floor and tried to leave but Isabelle wasn’t having it.

Fortunately when it came to Xenoblade Chronicles X I got a chance to really show off my skills. As an RPG with many intricacies that are confusing to pick up at a trade show, no one really knew what they were doing with this one – apart from me thanks to my familiarity with the previous entry in the series. People even started crowding round, presumably impressed at the effectiveness with which I navigated through the demo area.

I also discovered the horribly–titled–but–completely–awesome FAST Racing Neo, a futuristic racing game – which as frequent DC readers may know is my specialist genre. In the queue I didn’t see a single person finish any higher than last, and my overall third place was comparably impressive, especially considering that the attendant didn’t properly explain the boost mechanic to me. He didn’t seem as enthusiastic about the game as I was, but did seem surprised with my result, and I realised that it must have been frustrating for him to have to stand there and watch people suck at FAST Racing Neo all day.

As well as games there was an Animal Crossing photo area where you could get a picture with some virtual Animal Crossing characters that were brought to life using AR cards and the 3DS camera. Me and my friend thought long and hard about who we wanted in the picture, I chose Mabel (or Able I never really know) and made him have Rover. For a moment I couldn’t really remember if that was the cat’s name, no one else I could find knew so I asked the woman taking the photo. She wasn’t sure either, and then told us that the sloth character runs a garden shop. It was suspicious.

In fact the more I think about it, EGX was essentially a series of events in which people were unable to answer my questions about videogames. On the Xenoblade Chronicles X stand I asked the man if there was a bit in the demo where I could pilot the big robot. “Which robot?” he said. ”The one in the trailer”, I replied. He looked blank, then I realised we were standing next to a giant banner with a picture of the robot on it – “that one”. He didn’t know.

In the Sony area the new Ratchet and Clank game stood out as looking awesome. That’s to say I enjoyed it more than Need for Speed and Assassin’s Creed: Syndicate – the two other games I played there. Whilst both these games appear to be perfectly fine entries in their respective franchises, they were also very familiar. Ratchet and Clank meanwhile looked and played better than ever.

I also got sidetracked by some of the retro games set up to promote the PlayStation’s 20th Anniversary. I ended up on Tekken 3, although would have instead put my time into Ridge Racer next door if I’d sooner realised that it was part of a competition to win the prized 20th Anniversary Edition PlayStation 4 console. The challenge was to set the fastest lap time of the week, playing the beginner course using the default car, and whilst I didn’t race myself I did walk past it at closing and saw that the winning time was 1 minute 9 seconds something. Back home I tried to beat this and couldn’t come close.

There was also a full retro section of the show, and whilst when planning my day I’d dismissed this area as simply ‘games I already owned’, walking around was a different story. Sure, I recognised a lot of stuff from my own collection, and turns out my Master System is in better condition than the one that belongs to EGX, but there was also a lot of cool stuff I hadn’t seen before. In particular there were some arcade machines I got a go on as well as a digital pinball table that emulates classic tables using Visual Pinball and displays them on a large screen contained within a custom pinball cabinet. From what I could tell the software was still a work in progress, and the man promoting it exaggerated the cost of the real tables in comparison to his digital equivalent, but it was nevertheless pretty great.

Next I found myself at the Xbox stand, although as I already own Forza 6 and Rare Replay, and played plenty of Halo 5 in the beta, Rise of the Tomb Raider was the only thing on my mind. Unlike the others it was contained within a black room that looked almost like it could have been the very tomb the game’s title alludes to. Until you’d queued to get inside this strange area you couldn’t see the game at all.

This helped keep the puzzles found in the demo a surprise, although the queue outside turned out to be so long because people were getting horrendously stuck and taking ages to complete them. The girl next to me couldn’t get past the first trap (admittedly a little tricky) and when I’d finished it I went and found my friend confused and disorientated in the middle of the level. Helpfully I proceeded to tell him how to solve all the puzzles.

There was more stuff in the 18+ restricted area, although I can’t say I saw anything more shocking than the queue for Tom Clancy’s The Division, where half the booths weren’t working. I ended up in the Deus Ex: Mankind Divided presentation although this just turned out to be a video of the game and a man talking over it. Free posters though. 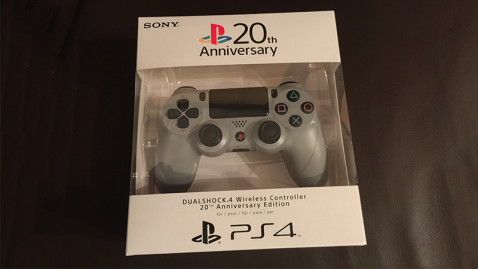 I also picked up a 20th Anniversary Edition DualShock 4 from the GAME Galleon (a shop that was accurately named), although was disappointed to find that these can also be purchased outside of EGX from places such as other GAME outlets as well as the internet. I was hoping it was a super rare game show treat, but oh well.

Then there were the indie games. I never felt quite comfortable around this area out of concern that the developers were hiding in the crowds secretly watching me. Sometimes I like to play games for only five seconds then do something else, but didn’t want to dismiss anything too quickly out of fear that I’d be offending the people that made them.

This paranoia of mine turned out to be justified. I saw one game that looked great and when I sat down to play the guy next to me introduced himself as the man who made it. Whilst the graphics were incredible the game itself was very confusing, but out of politeness I still played though the entire demo, even though I had to have every single puzzle fully explained and then solved for me and it took ages. 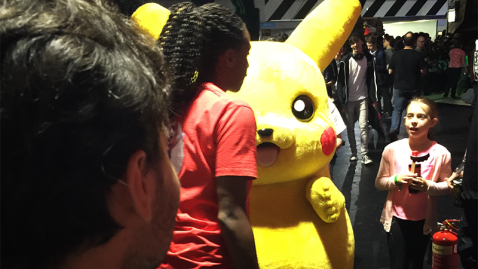 By the end of my time at EGX my back hurt quite a lot and I was both very tired and very awake because I’d drank too many free energy drinks. I had however met Pikachu, nearly been chosen for a Mario Kart tournament, and entered a competition to win all the amiibos, so it was worth it. I can draw a lot of comparisons to GameStars Live 2004 but I guess the real reason I’m equating the two so much is that I went to both events with the same friend. Eleven years later we still play games because they’re great. Will me and him go to another game show in 2026? Yes we will – as long as there’s another Mario Tennis on offer.