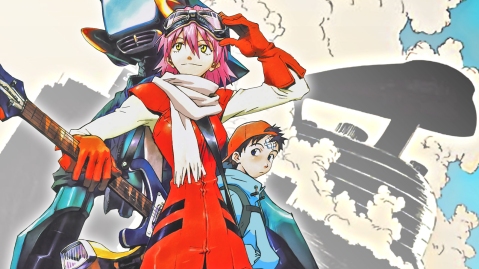 FLCL isn’t a show that can be easily summarised. In fact it would be fairly reasonable for you to get to the end of the first episode and not really know what the hell is going on. It’s certainly one of the most insane anime I’ve ever seen, but it’s combination of style, humour and nonsensical narrative completely flawed me, and even when I didn’t know what was going on there was never a second I wasn’t enjoying it. 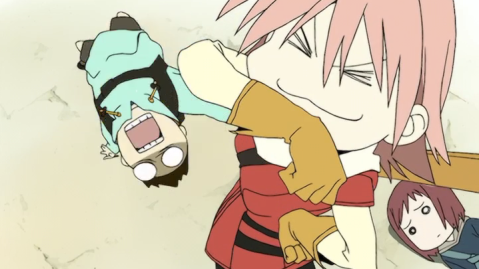 ‘FLCL’ is pronounced ‘Fooly Cooly’. Like many of the show’s jokes, this phrase has been slightly changed in translation, and the Japanese name, ‘Furi Kuri’, is a slang term for fondling. With some ambitious wordplay, obscure pop culture references and incredibly fast pace, I’m surprised by how comprehensible much of the content actually is. The translation has been done incredibly well, and the show’s unique sense of humour has somehow been retained.

The initial arrival of Haruko Haruhara is perhaps the moment you’ll realise that FLCL is completely mental. After running over protagonist Naota Nandaba, Haruko bashes him around the head with a bass guitar, leaving a horn shaped bump sticking several inches out of his forehead. It’s certainly a strange moment, but one that’s simply defining the logic the plot is going to follow. Once you begin to accept the weird rules FLCL is going to play by, it actually starts to become a surprisingly deep show with some powerful imagery and interesting metaphors.

And if you don’t, well you probably won’t like what you’re watching. FLCL never forces you to do anything; it won’t make you suspend your disbelief and it won’t make you understand it’s humour. But at the same time it never patronises you, and instead rewards you greatly for investing in it’s characters. The final episode in particular is superb, and by the time I had come to accept the show’s weird ‘quirks’ I realised that what is underneath is actually more significant; the brilliant characters and amazing sense of humour. 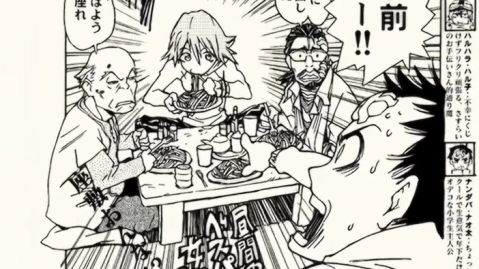 I was initially skeptical at how much impact an anime that was only 6 episodes long could really have on me (I don’t really know why, I mean movies are that long and some of them are great), and I was completely surprised by how much I enjoyed FLCL. It’s got more style than quite possibly anything I’ve ever seen, and highlights include some beautifully animated manga segments, as well as a killer soundtrack that keeps in time with the pace of each scene perfectly. Because of this, everything feels so profound, even when it’s really not, and there are several times when you’ll have to decide for yourself if what you saw had a deeper meaning, or was just downright ridiculous.

But it really doesn’t matter, as FLCL is always enjoyable. There’s so much packed into this show, and the amount of detail is astonishing. Its short run time doesn’t matter, there are still all the side stories and sub plots you’d expect from a decent anime four times the length. The characters may be mental, but they’re also believable, and watching them will make you identify with all their insane traits. For me Haruko makes the show, but you’ll be spoiled for choice when it comes to choosing a favourite. 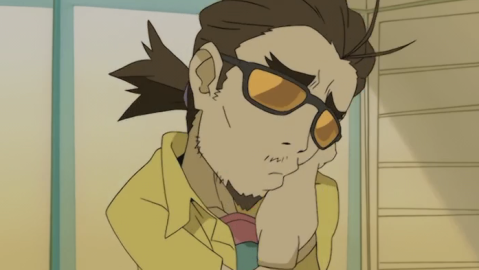 The only bad thing I can really say is that this show isn’t for everyone, although it’s so profound that even if you dislike it I’m sure you won’t deny that it was worth watching. It’s going to mean something different to everyone, as it asks you to identify with it in a very personal way. And if you don’t understand it then you probably won’t like it. But all of the best things don’t appeal to everyone, if they did they’d be boring and generic. FLCL may divide opinion, but it does so because it’s worthy of discussion. It does so because it asks a lot of you, and gives so much back in return. 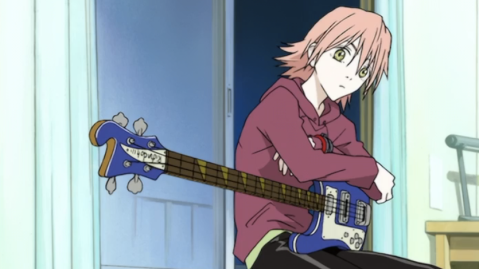