A strange thing is currently happening to one of my all-time favourite genres. Wipeout is no more, there hasn’t been a F-Zero game in over a decade, and Rollcage II came out in 1996 – the future of the futuristic racer is now a race between new IPs. Redout is the game that’s taken an early lead, and although heavily influenced by the aforementioned titles, it also throws some compelling new ideas into the mix.

I won’t deny that I’m easily pleased when it comes to high-speed adrenaline-fuelled racing. It’s a concept that is fundamentally fun, but nevertheless Redout is a game that understands what makes the formula a success, and it does a great job emulating the components that made the titles that inspired it so great. Tracks merge smooth straits with winding loops and huge jumps, whilst the ships look and handle like a dream. The sense of speed is impressive, and racing is both fast and intense.

The handling model doesn’t just allow for precise control at breakneck speed, but also feels unique enough to give the game its own sense of character. Whilst the most direct comparison would be F-Zero, the ships don’t lose grip when you turn sharply, which places it somewhere in the middle between Nintendo’s series’ and Wipeout. Although described as a tribute to both (as well as POD and Rollcage) the overall experience is a mixture of things that made these games fun. This blend stands in contrast to many of the recently released futuristic racers Redout is going to get compared to. GRIP is a spiritual successor to Rollcage, Formula Fusion is a modern Wipeout and FAST Racing NEO is really, really similar to F-Zero. All have their own merits, and picking favourites is perhaps a task for another day, but Redout has a notable element of originality.

The low-poly art style and impressive visual effects further help the game stand out, although it’s the thruster controls that I’d highlight as the game’s single most unique idea. These are mapped to the right analogue stick and give full aerial control of your ship, whilst allowing for precision turning and pitch-shifting on the ground. This gives additional depth to the steering, and it’s a system I was compelled to master.

Still, requiring both analogue sticks for control isn’t without drawback. Ideally you don’t want to be moving your right thumb of the analogue stick, but boost and power-ups require the face buttons. Because of this Redout oddly ends up as one of the best games to pair with the Xbox One Elite Controller, with the back paddles completely resolving this control issue. 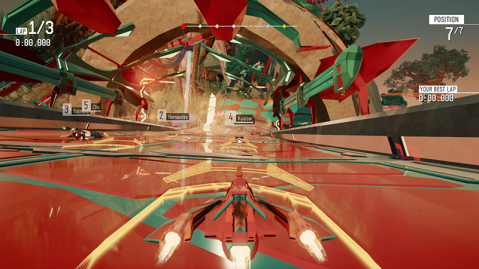 It’s perhaps worth noting that Redout has seen a few significant updates since its release, including mechanical refinements, tweaks to balance the A.I difficulty, and free DLC adding new tracks. These improvements have come as a wonderful surprise as the game launched in a highly polished state, ran without fault, and came packed with content.

Whilst there’s a tonne of tracks set across 4 (now updated to 5) landscapes, the campaign structure still feels slightly odd. I was actually surprised by how substantial this mode is considering the tiny box from which you pick races, and when I saw that the first two events are set on the same course I incorrectly presumed that the game would be lacking in content. Still, everything is predominantly grouped together by environment and this means that variety is compromised when playing through races in order. You spend way to long racing through Cairo and Alaska, and it’s not until the game’s final third that you’ll unlock Volcano – the nicest looking and most exciting set of tracks.

After completing the career mode I was compelled to revisit old events to tally up more gold and platinum medals, but one too many brutally tough time-attacks means I’m still yet to see this task through. Whilst implementing an F-Zero GX inspired level of difficulty isn’t completely a bad idea, when mixed with a campaign the length of Wipeout HD Fury, the result requires a level of commitment only a select few will be willing to give. 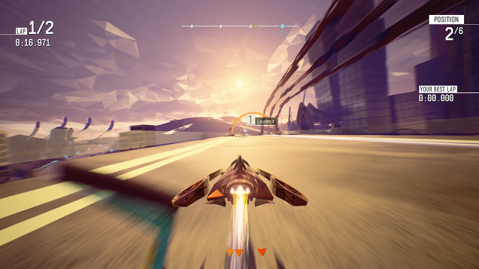 If it wasn’t for the fact that Redout is openly inviting the comparison, I’d probably at least try and resist the urge to repeatedly compare it to the genre’s two most masterful series. Did I mention that the tracks really remind me of the Classic 2 DLC courses from Wipeout Pure? Redout sets out to bring elements of these games to modern platforms and at doing this it totally succeeds. Captain Falcon might not be returning any time soon, but the futuristic racer is definitely back.

F-Zero: When will Captain Falcon return?

One response to “Review: Redout”