The future is a wonderful place full of possibility, excitement, and crazy new inventions such as flying cars. For racing games it allows for new ideas, faster top speeds, crazy track designs, and vibrant atmospheres. I’ve always been surprised by how few videogames have really explored these compelling concepts, especially considering how most that have either resulted in wildly exciting series, or at least a couple of extremely fun titles. This is a top ten list from only a handful of games, but each is a truly awesome racer that any fan of the genre should have in their collection. 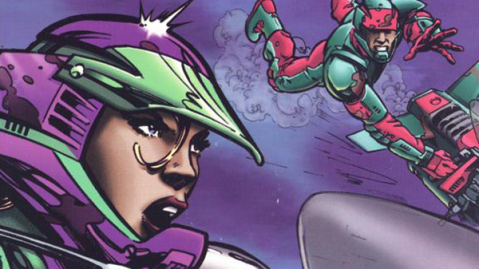 In total there were three Jet Moto games released for the original PlayStation, although only the first two made it to Europe (under the title ‘Jet Rider’). The trilogy is overall pretty good, although Jet Moto 2 stands out as the best thanks to its huge selection of courses, which also includes all of the content from the first game. This is an awesome mix of land and sea tracks, and this large amount of variety helps make driving a Mountain Dew endorsed flying jet-ski exactly as fun as it should be.

Quantum Redshift was a Wipeout game in disguise. It was created by Nick Burcombe after he left Psygonsis in 1999, and it was essentially the game Wipeout Fusion should have been. Just don’t be put off by its terrible name and even more terrible box art, mechanics wise Quantum Redshift is still a lot of fun today, and has aged far better than the majority of original Xbox games.

Episode I: Racer isn’t just a pretty good Star Wars game, it’s a pretty good futuristic racer too, capturing all of the thrills of the first movie’s pod-racing scene. Originally released for Nintendo 64, an enhanced port was later made available for the Dreamcast. There was also a PlayStation 2 sequel titled ‘Racer Revenge’ which is okay, but lacks the charisma of the original. IT’S A NEW LAP RECORD.

XGRA was so good that no sequel was ever needed, and Acclaim died in 2004 knowing they had achieved gaming perfection. That’s my theory anyway, although I’m not sure if anyone agrees with it. In fact I’m not really sure if anyone else actually liked XGRA at all, but these people need to play Jet Ion GP and get some perspective. Seriously though, XGRA was an awesome game. It had a lengthy career mode, a lot of crazy tracks, and racing that was just pure fun. It also fixed the borderline broken mechanics that made Extreme G-3 a chore to play at times.

Whilst futuristic racers were as uncommon in the 8-bit and 16-bit eras as they are now, the few games we did see were really really good. This included classics such as F-Zero, OutRun 2019, Galaxy 5000 and my own personal favourite, Biker Mice From Mars. All deserve to share this spot on the list, but I’ve gone with this underrated gem, an amazing isometric racer that’s made even better thanks to an overwhelmingly large amount of product placement from Snickers.

As well as the Jet Moto trilogy and the Wipeout trilogy, the original PlayStation had two thirds of a Rollcage trilogy. In these games you drove what looked like a giant Tyco Rebound really fast, riding on walls, ceilings and anything else that got in your way. For me the first game has some serious nostalgic value, but then the second has better graphics and more tracks. Both are good, really good.

Probably the epitome of ‘New Wipeout’, Wipeout HD Fury was a kind of ‘best of’ game that took content from both PSP titles and remastered it within an inch of its life. Whilst Wipeout Pure still ended up having more tracks (thanks to a massive onslaught of free DLC), HD Fury benefits significantly from the huge visual boost, and it still looks stunning today. It’s also the best futuristic racer of the PS3/Xbox 360 generation (last gen or whatever) with second (and last) place going to Fatal Inertia. 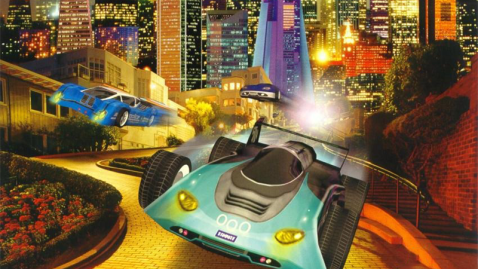 Another Nintendo 64/Dreamcast game that was better on the Dreamcast. San Francisco Rush 2049 has an amazing atmosphere and brings to life a really cool futuristic world. Of course it also had the series’ unique physics, which were made even better thanks to the addition of wings that would extend out of your car allowing you to fly like an eagle. 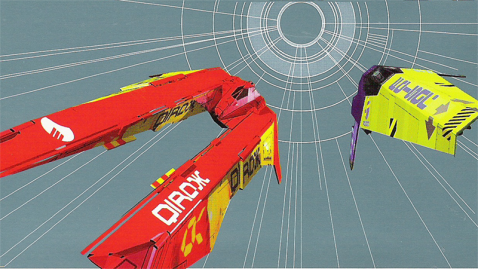 Before ‘New Wipeout’ there was ‘Old Wipeout’, a trilogy of games defined by electronic music, electrifying races, and the influence of The Designers Republic (or tDR). Wipeout 1 was a good game, but the formula was perfected in Wipeout 2097 (known as Wipeout XL in some regions), and even its competent sequel didn’t match what was, at the time, the best futuristic racer ever made. This was thanks to its dark atmosphere, varied tracks, brilliant soundtrack, and high presentation values.

Could there be any other winner? Back on Nintendo 64 F-Zero X was good, but the console lacked the power to properly realise many of the game’s ideas (for instance the tracks didn’t have any scenery). Nintendo and SEGA then teamed up (a first) to make the amazing sequel that will probably remain at the top of its genre forever. The tracks were jaw dropping, the sense of speed was spectacular, and the graphics were stunning. Plus the game ran super smooth even with twenty nine other racers on the track at the same time. Finally it also had all the content from its arcade counterpart (F-Zero AX) hidden behind the game’s most brutally tough challenges, making the task of mastering the game an epic and exceptionally rewarding experience.