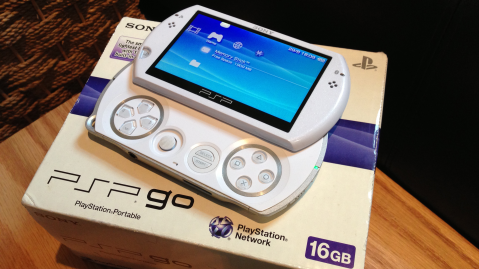 When the PSP Go first came out in 2009 a lot of people (myself included) didn’t take the console too seriously. In fact, its lack of UMD tray and reliance on the PSN meant I had little interest in what is now dark horse of the PSP family. But a few years later I’ve decided to give it a go (awesome pun intended), and for £50 picked one up, boxed in good condition. Today I’m going to look at the pros and cons of the system, and ask if in 2013 this shiny misfit of a PSP is now an underrated classic?

The PSP go is actually a really good looking system. The build is high quality, the screen is nice and the sliding mechanism is smooth. Whilst the silver circles around the buttons and D-Pad look a bit too prominent on the black version of the console, there’s not much I can fault about the look of the “pearl white” system I purchased. And that’s not just a buzzword, the outside of the console has a serious sparkle to it that looks great, especially when the light reflects off it.

I was also surprised by the quality of the buttons, which feel almost like those on a PS Vita, only flatter so they can slide under this system. The analogue stick is a mini version of that found on a regular PSP, and whilst it might be too small for some I personally found it fine. In fact the only real issue I have is with the shoulder buttons, which are slightly out the way much like on a Nintendo DS. But even then they’re perfectly usable and not too uncomfortable. This is made up for by the addition of a built in hard drive, which gives you an additional 16GB on top of whatever you stick in the memory card slot. Can’t really complain about that, whatever you’re using the console for.

Games wise the PSP library needs a bit of filtering before you get to the stuff worth playing, but there’s still some real classics to be found (I’ve wrote a list of these classics, you can find it here). You’ve also got superb PS1 support and and overall the console has a varied library of games.

Compared to the Vita:

The necessity to own a PSP has arguably been reduced by Sony’s newer handheld, but playing the two side by side yielded some interesting results. Since I got the Vita I’ve been a bit put off by the oversaturated colours that appear when playing either PSP or PS1 titles. Pretty much all games I tested were much easier on the eye when viewed on the PSP Go.

Then there’s the screen size. Games designed for the Vita’s screen can be truly stunning, and something like Wipeout 2048 looks incredible. But PSP content was never made for such a large screen, and when upscaled it can look pretty nasty. Looking at the same game side by side there really is no contest; the image is far superior on the PSP Go’s smaller screen.

This justifies the PSP Go as a console worth owning. Whilst in theory the Vita can play most of the same content, it doesn’t do your PSP or PS1 games justice. So if you’re looking for a cheap console with a tonne of great games, I’d certainly recommend the PSP Go.