Looking back it seems almost crazy to think I once expected to pick up Rayman Legends as a launch game for the Nintendo Wii U. In fact this was the deal breaker for me, and I’d already bought the console before it was announced that not only would the game not make its March release date but it was now also coming out on pretty much every other console known to man. Now almost a year after I first played it, Rayman Legends is finally here. Worth the wait? Yeah. 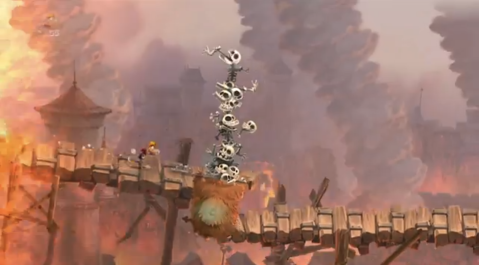 Perhaps what was most disappointing about Rayman Legends turning multi platform was not the delayed release date, or the fact that the game was no longer reserved to myself and the small few that were early adopters of Nintendo’s new console. Instead, this was billed as a next generation game, one of the first to demonstrate the creative power of a new system. When Ubisoft turned around and admitted that this experience, supposedly only possible on the Wii U, could actually be enjoyed on your Xbox 360, PlayStation 3 (or even PS Vita why not) I was pretty worried that the game wasn’t actually doing anything the current hardware hasn’t seen before.

But here we are, and I can thankfully confirm this isn’t the case. Rayman Legends has so much creativity and originality that it honestly feels like a next generation game, without the price tag. This is a game that proves that whilst new consoles may drive new experiences and open people up to trying new types of games, we all already own systems capable of playing new games that will make your jaw drop.

The thing about Rayman Legends is that gameplay wise it’s going to feel very familiar to anyone who played Rayman Origins. Rayman runs, jumps and punches in the same way he did in 2011, and this could have easily resulted in a game that feels too familair. But instead it’s clear to see that the two years of development time were spent creating wonderfully imaginative and original levels that result in a truly unique platformer. The fact that you probably already know how to play the game only adds to the experience, as the game jumps right in and wastes no time with lengthy tutorials or simple opening levels.

But whilst the main mechanics are the same there is of course the additional gameplay elements introduced to work on the Wii U. These are still present on the Xbox 360 or PlayStation 3, and it is at times clear to see that these were not the designed platform for the game. Swiping and tapping actions are translated to the circle (or B) button which requires little to no precision for a lot of tasks that would involve you more actively on a touch screen device. It still functions though, and considering the circumstances it works as well as it could.

Playing Rayman Legends reaffirmed my theory that the quality of a platformer is pretty much all down to the quality of level design. For the same reason Super Mario Galaxy 2 was so much better than the original, Rayman Legends is far superior to Origins, even though aesthetically they look similar. If you’ve already played the (awesome) Castle Rock demo then you kind of know the level of quality this game will deliver, and you can expect plenty of equally brilliant stages. The game mixes sound, graphics and gameplay to create a unique platformer with a truly staggering amount of variety. I can’t recommend this game enough, it’s impossible not to love it.