Muramasa Rebirth is one of the nicest looking games on the PlayStation Vita. It’s also a hell of a lot of fun to play, and with its additional DLC there’s an awful lot to see and do. As well as the original, adapted from the 2009 Wii game ‘Muramasa: The Demon Blade’, Vita owners have been treated with four smaller stories that make up the Genroku Legends. After a slow release schedule the full package is finally here, and today I’ll be reviewing the complete version of Muramasa Rebirth. 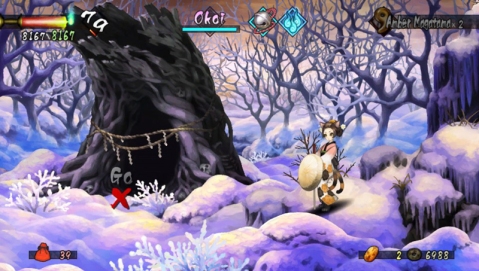 There’s this quote by Shigeru Miyamoto that goes like this; ‘Players will put up with mediocre gameplay as long as the art is good’. Now I’m not saying that Muramasa’s gameplay is mediocre (it’s actually really great), or even that I think this quote is entirely true (it was mainly Miyamoto having a dig at Donkey Kong Country after it outsold Super Mario World 2: Yoshi’s Island) but it does hold some relevance. This is because the art in Muramasa is good, and it’s so good that it compensates for some of the game’s flaws.

The game design is a little repetitive, there’s a fair bit of backtracking, and you end up fighting the same enemies quite a lot. You’ve also got an overarching structure that encourages replaying the game a few more times than you’d perhaps otherwise consider, thanks to the inclusion of additional characters, difficulties, and endings. But I was surprised by how often I did find myself coming back for more, and it’s because Muramasa is such a joy to behold.

On the Wii this was a great looking game, but on the Vita it is outstanding. The levels are hand drawn works of art, and the crisp fidelity of Sony’s handheld brings them to life. The colours are vibrant, the animation is smooth, and this level of style carries over into the menus, maps and overall presentation of the game. The soundtrack also helps bring Genroku Japan to life, and creates a world that is enthralling, immersive, and great fun to explore. 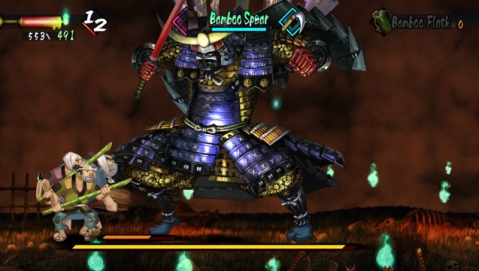 You’ve also got an interesting enough story which acts as the backdrop to your adventure. The game has two narratives to chose from, and these are tied to two different characters who share the same world (and forged swords) but have their own abilities, their own journey across the map, and their own boss areas and fights. Playing through as both characters offers enough variety to make the second story feel far more than a second playthrough, and you can enjoy them in parallel instead if you chose to do so.

The details of the narrative can get a little confusing, and whilst the writing is good – and on occasion quite funny – the game struggles by only interacting with the player through text and spoken dialogue. At times it feels as though you’re simply waiting to find out where the game is going to send you next, and in comparison to the mostly action-oriented mechanics the lengthy sections of text can feel a little slow.

I did still enjoy both Kisuke’s and Momohime’s stories, but there always felt like there was potential for something more. Fortunately the Genroku Legends find more success when it comes to storytelling. These four pieces of DLC bring four new playable characters, and four new stories set in the Muramasa world. Of these, Fishy Tales of the Nekomata and Hell is Where The Heart Is stand out as real highlights, although both for their own individual reasons. Fishy Tales is possibly the darkest Genroku Legend, and tells a revenge story full of misery, anguish and tragedy. Meanwhile, Hell is Where The Heart Is tells a far more light-hearted tale about a child demon who attempts to marry a sleazy womaniser. 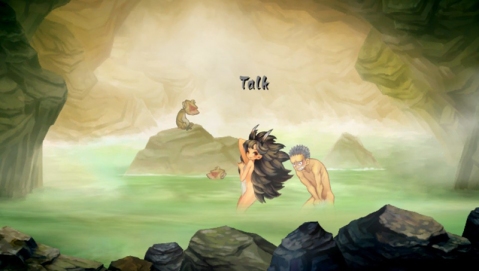 The new characters also add further variety to the game, and their abilities make for some pretty drastic changes to the mechanics. Whilst the main game lets you equip a selection of three swords, each with their own special abilities, the Genroku Legends characters have three very different pre-set abilities that can be leveled up. Okoi for example can fight off enemies with her claws in human form, transform and fight as an actual cat, or turn into a giant cat demon that eventually explodes into a floury of cats.

Whilst the characters are great, there’s a disappoint lack of new locations. Fishy Tales, which was the first expansion to be released, had a few pieces of new art, but these were then reused in A Cause to Daikon For. DLC numbers three and four took so long to be released that we should perhaps be grateful we got them at all, but I still couldn’t help but feel a little disappointed that after all this time the new levels felt like a copy-and-paste job from the original game. Fortunately all four episodes do bring some great new bosses to the game, and these add an element of originality into each of the Genroku Legends.

It’s also worth mentioning that the DLC was always priced right, and does a great job of extending the lifespan of the game significantly. Whilst the new stories only take a couple of hours to complete, you’re them encouraged to go back and fight the bosses from the original game, and maybe even clear some of the Caves of Evil. So far I’ve spent an additional twenty hours playing Genroku Legends, and there’s still a tonne of stuff I’ve yet to do. 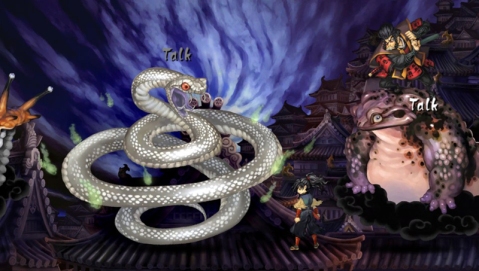 To some extent the DLC is integrated well into the main game, Genroku Legends has its own option from the main menu and this reflects the fact that the four stories together create a package of similar substance to the original game. However, they also represent the only new content not found in the Wii version, so the fact that they were released separately, and that the release schedule was so staggered is a little strange. I also don’t like how the new areas are linked to the original map through lazily designed portals. With the entire game being redrawn it could have easily been expanded in a natural way, and the map could have been adjusted to include additional areas.

Muramasa is now available as a ‘complete edition’ that includes all DLC, and this retails on the PSN for roughly the same price that the standard game did when it originally came out. This overall package feels like the game Muramasa should have always been on the a Vita, and whilst the Genroku Legends don’t overshadow the original game, they add a lot to the experience by bringing further variety and longevity. 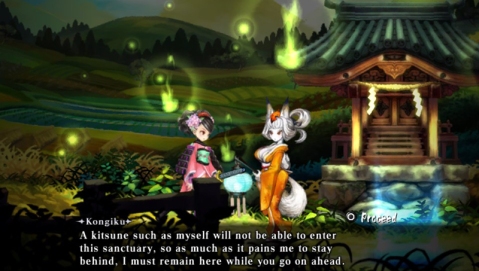 Not only is Muramasa a bargain, but it’s an absolute must for any Vita owner. It’s one of the nicest looking games on the system, and even after countless hours it remains great fun to play. This shouldn’t be overlooked, as whilst it may be the graphics that make it stand out as a title, Muramasa also has awesome and addictive mechanics, and this is what makes it worth sticking with.

Also check out: How to Complete Absolutely Everything in Muramasa Rebirth 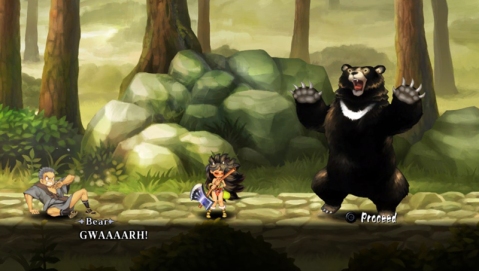