I can’t have been the only person who watched Persona 4 The Animation and then saw this coming. I can’t have been the only one who, after finishing the highly enjoyable and faithful retelling of the Persona 4 story, thought that one day the same justice would be done to Persona 3. That one day we’d have a P3 anime that wasn’t Trinity Soul. Well, that day has finally arrived. The first Persona 3 movie is here. 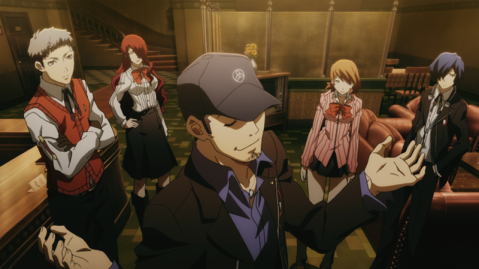 Maybe the fact that we’re getting a series of movies rather than a show is a little surprising, but the format has a few interesting advantages I hadn’t previously considered. I’m going to admit right away that I prefer the story of Persona 4, and whilst both are good for different reasons in terms of style and atmosphere, more stuff happens in Persona 4 and it’s more exciting. This isn’t necessarily a criticism of Persona 3 (P4 was the sequel after all, it should have been better) but the fact is that if the same formula for Persona 4 The Animation had simply been applied to Persona 3, it’s likely that the end result would have been the weaker of the two shows.

However, as a movie Persona 3 does many exciting things that wouldn’t have otherwise been possible, and easily compensates for its simpler and streamlined story. Firstly there’s the animation quality; this is a stunning looking film. There’s a new ‘Golden’ version of the Persona 4 anime set for later this year, which promises to update the occasionally lazy animation from the 2011 original, but even this is unlikely going to compare to the immense beauty of Persona 3: The Movie. At roughly an hour and a half in length, it can afford to maintain an exceptionally high visual quality from start to finish.

Of course Persona 3 had a very unique feel to it, so what’s perhaps most impressive about the film’s art direction is not only the fact that it’s pretty much flawless on a technical level, but that it captures the game’s dark atmosphere perfectly. Locations from the game are brought to life and given a vibrant new look, whilst also retaining the same details that any fan of the game will remember fondly. Animations such as the school turning into Tartarus are rendered beautifully, and many elements of movement and action that were previously left to the imagination are now visually stunning and exciting.

Then there’s the soundtrack, which is also amazing. The film’s music is a mix of familiar songs from the original game, as well as additional new material also composed by Shōji Meguro. Anyone who’s seen Persona 4 The Animation will know how easily the music can be used to really capture the feel of the game, and this is even more true for Persona 3: The Movie. The theme song, a new version of Burn My Dread, is particularly good, and instantly stands out as one of the series’ best tracks to date. 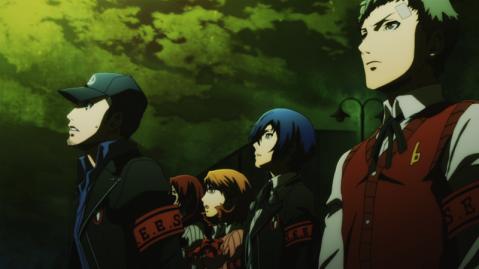 But whilst Persona 3: The Movie may be an audio/visual treat, this does have to compensate for a few flaws with the story. It’s not doing the game any injustice or anything, but when the source material is 1/4 of a videogame, not everything is going to translate perfectly into a different medium. Put simply; watching characters fight shadows just isn’t that interesting. But it’s almost as if the movie knows this too, and not only do these scenes never overstay their welcome, but the use of sharp visuals and impressive effects not only makes them incredibly tolerable, but actually a little (dare I say it) exciting.

Yet whilst sometimes the film’s fast pace is one of its greatest strengths, at others it means that certain elements from the game are either brushed over or omitted altogether. I was personally hoping to see some of the side story’s brought to life, in particular some of the teacher/student romance material, but I wasn’t in luck. There was however at least a scene at Wild-Duck burger, which made me smile.

Of course this is only a small flaw made more frustrating by the fact that Persona 4 The Animation dealt with the additional social link storylines so well. On the plus side, burning through the source material at a lightning speed makes for a fast paced and exciting film that feels perfectly aimed at entertaining Persona 3 veterans. For newcomers it may be a little confusing, and a few key concepts aren’t properly explained (what is Tartarus?!), but there’s so much here for the fans that it’s clear this was who the movie was designed for, and starting with the game first is a no-brainier.

There’s also little room for the film to develop its extensive cast. This is particularly true for main protagonist Makoto Yūki, who’s a real Yu Narukami in the making. As with Yu, Makoto was a silent protagonist turned talking protagonist, and he’s been adapted into a full character following roughly the same formula P4 The Animation created. However, Yu didn’t really come into his own until the final third of the show, and it’s likely that we’ll have to wait a bit longer to witness a similar evolution of Makoto’s character. For the majority of Spring of Birth he is exceptionally quiet and subdued, and the final section of the film deliberately goes out of its way (and slightly alters the source material) to provide an important lesson on friendship. This feels like a deliberate set up designed to create the Makoto we will be seeing in the future movies. 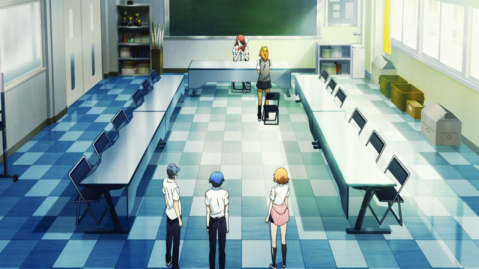 Whilst the changes made to the story help make for a more exciting and satisfying conclusion, there’s no denying that the games plot doesn’t split into parts easily, and the film ends with zero resolution to anything that’s happened in it. This will likely be less of an issue once the entire series has been released, but for now there’s absolutely no pay off.

Still, Persona 3: The Movie is by no means The King of Eden (a film where lots should have happened but nothing did happen), and overall I enjoyed it a lot. It captures the feel of the game perfectly, and retells its story in an exciting way that will please fans. Considering the nature of the source material, this is the best film we could have asked for, and I’m already looking forward to the sequel.

Persona 3: The Movie #3 Falling Down

2 responses to “Review: Persona 3: The Movie #1 Spring of Birth”