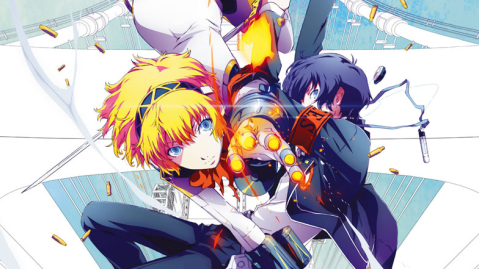 It’s been ten months since Persona 3: The Movie #1 Spring of Birth; a great film that left me wanting more. Having covered only the first portion of the game, Midsummer Knight’s Dream begins right at the point things pick up, and progresses the story with the addition of several new characters. This does however come at a cost, and several members of the main cast have marginalised roles as a result. In spite of this, Persona 3 The Movie #2 mostly succeeds at fighting the difficult battle of translating its source material into the most compelling film possible. 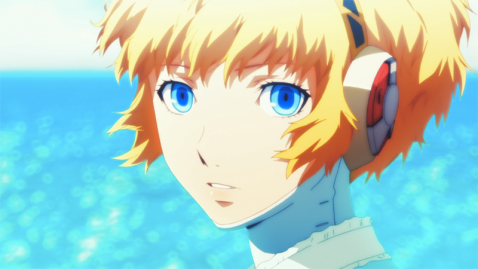 In its ninety minute run time, Aigis, Ken and Shinji get a lot of screen action. In some ways this is really great, Aigis in particular is one of my favourite characters so I enjoyed her strong presence. Throughout the film we begin to see her relationship with Makoto develop, and having played through the game I’m confident that there’s more to come in the next movie. The way she is integrated into the more light-hearted sections of the story also works well, and watching her disguised as one of their classmates and making uninhibited advances on Makoto in front of Yukari is definitely a highlight.

Ken and Shinji on the other hand I’m not so fussed about. It’s clear to see why they are so prominent, as their relationship forms a plot arc that is both introduced and concluded in this segment of the game’s overall story. This makes for a movie that feels more rounded than the first, and whilst I wouldn’t recommend watching it in isolation, it would probably just about make sense if you did. 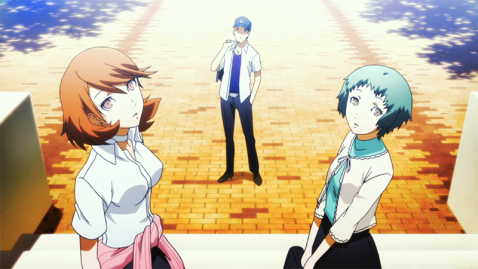 The main problem is that their development comes at the expense of the core characters, and the likes of Junpei, Mitsuru and Fuuka simply assist in battle, adding nothing meaningful to the overall story. Then there’s Strega, the laughably weird and disappointingly one dimensional villains who are attempting to kill the S.E.E.S protagonists because they like the dark hour and the magical powers they possess because of it.

Of course weak antagonists isn’t so much the fault of the Persona movie as it is a problem with the game, and effort has at least been made to ensure their motivations are clear. Their love of the dark hour even has an impact on Makoto, and his realisation that fighting shadows has given him a sense of purpose adds a new and complex aspect to the story. This not only helps develop his character, but gives additional depth not found in the game.

There are further areas in which the film does an excellent job of adapting its source material, and it’s always worth remembering that structurally the story was designed as a game and not a series of movies. The game delivers progress through repetitive tasks, and working towards set goals. Climb floors in Tartarus, kill shadows at full moon, repeat. And there’s nothing wrong with this, in fact the element of routine found in Persona 3 is part of what makes it such an interesting and experimental game. But as a film things need to feel less rigid, and thankfully they do. Shadow fights are worked seamlessly into the story, and battle scenes are short and sweet. The roulette wheel boss in particular deserves special mention for being infinitely cooler than it was in the game.

As with Spring of Birth, it’s the audio visual spectacle that keeps the film entertaining throughout, and holds everything together when the story stumbles. Being produced by the same team as film #1, Midsummer Knight’s Dream delivers the same high quality production values, and overall I’d say it looks even nicer thanks to a wider variety of settings. Then there’s the music, of course the first movie and Persona Q have already proven that Shōji Meguro is still creating excellent new Persona 3 music, and the soundtrack here is outstanding as expected. 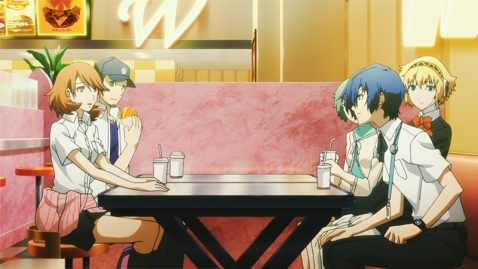 Overall, Midsummer Knight’s Dream is a great sequel to last year’s film, and it’s a treat for fans looking for the next installment in the series. Whilst the story fails to develop some of the main characters, it’s got a strong arc that delivers in many other respects. In particular there’s a good mix between the light-hearted antics and fun found in its first half, and the more series tone and dark ending that follows. As things only get bleaker from here on in, it’s likely that the film will stand out as its own distinct chapter when compared to movie #3, which is titled Falling Down and is coming out in Japan very shortly. This sequel is teased at the end of Midsummer Knight’s Dream, and thanks to the overall quality of film #2 I’m already immensely excited for the next entry in the series.

Persona 3: The Movie #3 Falling Down