Whilst widely regarded as one of the PlayStation 2’s best games, there’s also a sense that no one really knows what to make of Persona 3. In many ways it’s an accomplished title, and one of the underground hits that defined the final years of the PS2’s lifespan. But it’s also slow, repetitive and unrefined. It’s easier to define what’s bad about Persona 3 than what’s good about it, yet it is good. It must be good, they make movies about this game. 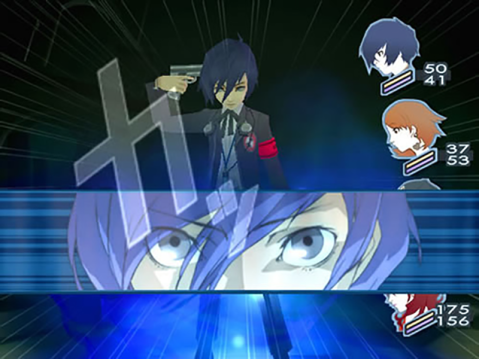 Unlike the first two (sorry, three – I haven’t forgot you Eternal Punishment) games, Persona 3 was directed by Katsura Hashino, and marks a turning point in Atlus’ series. Whilst some elements such as the demon-summoning remain, and the original release still had the Shin Megami Tensei prefix, the game is dominated by new mechanics and ideas.

Most notably there’s a unique calendar system where you spend your days attending school and building up Social Links, whilst by night you dungeon crawl and battle shadows. It’s up to you how your spend your free time, but – and here’s the problem – there’s relatively little to do. At times it feels like the game is trying to make a strange statement about the boredom of being a real-life teenager. Specific calendar events such as holidays aren’t capitalised on properly either, and these feel like missed opportunities.

At night the school transforms into a large tower called Tartarus. Your objective is to climb this tower. It’s the only dungeon in the game, and whilst it is split into tiers that look slightly different from each other, the variety is slim. The game never feels like it’s taking you far beyond the space located between the dorms you sleep in and the school you spend all your time at, resulting in a static experience.

The battle system also has notable problems, in particular the limited control you have over your team. Aside from general tactics, they basically chose their own actions, and it’s incredibly frustrating when they fail to exploit enemy weaknesses or repeatedly use ineffective healing items. The option for direct control was added in Persona 3 Portable, released for PSP in 2009, but this version of the game simplifies overworld navigation. There’s further differences between the two, including the option to play as a female protagonist in P3P and an epilogue titled ‘The Answer’ in FES. Overall there’s not really a definitive version, I played FES as it’s the version most similar to Persona 4.

Persona 3’s story focuses on a group of teenagers who investigate the ‘Dark Hour’, a mysterious phenomenon that takes place at midnight. Monsters known as Shadows roam free, and it’s up to you to stop them using the power of your Persona – summoned by shooting yourself in the head with a gun-like device known as an Evoker. The atmosphere is well-crafted but the story focuses too much on the supernatural and lacks drive because of this. Even in it’s second half, where the end of the world is impending, there’s still a lack of tension. Many of the main themes and concepts are also found in Persona 4, but here they feel more refined. The Midnight Channel is a better realised version of the Dark Hour, and the additional murder-mystery element helps elevate the plot.

In Persona 3 it’s up to the characters to deliver engagement with the story. The player-named protagonist (Makoto Yūki in the movies) is a bit of a blank canvas, onto which we are presumably meant to project ourselves. The rest of the cast are likeable, and some of the game’s best storylines are the Social Links you can build up in your free time. Two of these involve student-teacher relationships, and these surprisingly engaging subplots act as a great counterbalance to the main narrative. Alongside that you’ll be trying to romance your female classmates and help some old people save a tree.

Whilst the character art is great, the in-game graphics are naturally limited by the hardware. Originally released in 2006 and then re-released as Persona 3 FES (which apparently stands for ‘FEStival’) in 2008, it has many traits that don’t give it away as a PS2 game, but the graphics aren’t one of them. Textures are low-res, and environments are notably simple. Tartarus in particular lacks detail, and its design gets repetitive. The randomly generated maps don’t help either, and overall there are large areas of the dungeon that are completely indistinguishable from each other.

Persona 3’s best element is probably the soundtrack. Shoji Meguro makes incredible music, and the game is elevated thanks to his score. The catchy tunes add to the title in a subtle but incredibly important way – and the great music is undoubtedly why I enjoyed the game as much as I did. Audio is often undervalued for what it adds to a videogame, but as with all the classics the soundtrack here is unforgettable. Yes, the story is quite good, the atmosphere is immersive, and Persona 3 can be quite fun to play, but this is the one area in which the game truly delivers.

In many ways Persona 3 isn’t a great RPG, but it’s still a great game. Before I knew it I was twenty hours in, and one of the reasons I was finding so many flaws with the experience was how much time I was putting into it. I’m a huge fan of the sequel, and many of Persona 4’s mechanics are present here, but over the course of the 80+ hour adventure they become deconstructed due to a lack of refinement. In isolation the game can be considered innovative, but it’s easy to see where improvements have been made if you’re playing the titles in reverse order. Yet it’s still an interesting and memorable experience in its own right, I mean what other game lets you date a robot?

Review: Persona 3: The Movie #3 Falling Down