When Grand Theft Auto: San Andreas was released on the PlayStation 2 back in 2004 it was certainly the biggest GTA ever made. But such a game taught us that bigger is not always better, and it would appear that Rockstar North has approached the challenge of every subsequent GTA with caution. It’s taken them five years to craft the sequel to one of the most iconic and well loved games of the generation, but is Grand Theft Auto V enough to satisfy those use to the ridiculously high standard set by the series? Honestly? Yeah.

So I’ve just finished the game’s first heist. I’m escaping on a motorbike with a big bag full of stolen jewellery and next thing I know I’m jumping into a sewer pipe, in slow motion, to escape the police. This is the moment I realise that GTA V is capable of delivering an experience unmatched by any other game currently available, and it’s only one of a handful of jaw dropping moments you’ll be enjoying in the first few hours of the game. For me the bland missions in GTA IV didn’t leave a lasting impression, and thankfully this is not a concern with the latest game.

In fact, Grand Theft Auto V has all the imagination of the older GTA games that made me fall in love with the series in the first place. Despite it’s realistic world and selection of mundane activities for you to participate in, this game is in no way a simulator. It sounds stupid that I’d almost forgotten this, but GTA is about crime, and the game’s levels borrow influence from (and sometimes parody) classic crime, action and thriller movies without jumping the shark in the way San Andreas perhaps did.

GTA V certainly borrows the best bits from the series’ history, but it also adds a lot of new stuff, and (perhaps more importantly) removes many of the issues that have plagued the series for over 10 years now. You can finally save anywhere, the missions have some reasonable checkpoints, and both the shooting and the driving has been improved. I noticed elements from other Rockstar games including Max Payne 3, Red Dead: Redemption, and even Midnight Club that have helped fix the dodgy mechanics that resulted in GTA IV ageing fairly badly. 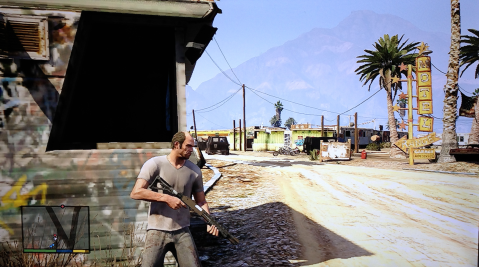 Then there’s the story. The storylines in GTA have always had their quirks, but this is the first game in the series to have such a strong narrative, and one that drives the gameplay in a meaningful and exciting way. The game’s three protagonists certainly mix up the gameplay, but it’s the story that benefits most from this design choice. Whilst other titles in the series had some great characters, they rarely stuck about for the entire game, and were often forgotten about once their mission strands ended. In comparison, GTA V has three great characters with an intertwined fate, and this results in an overarching narrative far superior to anything previously seen in the series. This is combined with an excellent satirisation of modern mass culture, and the game reflects contemporary society in a clever and sometimes twisted way.

When it comes to gameplay I’m not sure if I prefer the creativity and variety in the mission design, or the detail and imagination that’s gone into the game’s world (which is massive by the way). Overall it must be the way that everything works together that results in such an enjoyable experience. The soundtrack is brilliant, the supporting characters are superb, and the game has an incredible sense of humour. I’m sure you’ll find your own reason for falling in love with Grand Theft Auto V, and you probably don’t need me to tell you to go out and buy this game.