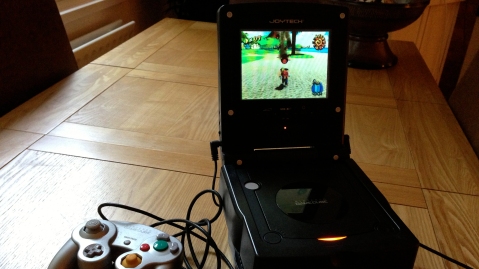 These days you don’t hear very much about the Joytech TFT Monitor, but I remember when this item first came out back in around 2003. At the time Joytech made two different screens specifically designed for the Nintendo GameCube, but of the two this one was notably superior, as well as harder to find. In fact, the shop I ordered it from (I think it was Argos) originally sent me the STN Monitor, and once this error was finally resolved I saw for myself the vast improvement in picture quality that the TFT delivers. It’s as true today as it was ten years ago that this is hands down the best portable monitor available for the GameCube, and it’s now even more difficult to acquire than it was back then. 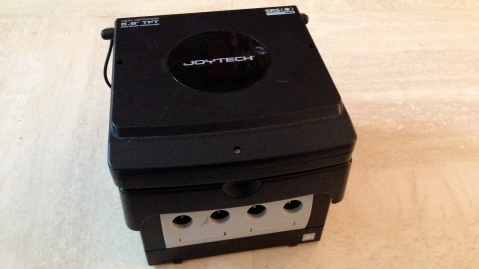 The benefits of such an item hardly need pointing out. I mean it’s a portable GameCube!! The GameCube is quite possibly my favourite system ever and has a huge library of games that can now be enjoyed on the go. The monitor itself has a great picture, and whilst it might be lying when it claims to be ‘High Definition’, the image it produces is great even by today’s standards. It clips over the GameCube securely and when folded down is about as compact as it could be. There’s also very few wires; the screen has two cables and each are only a few inches in length. One is you’re standard AV cable whilst the other powers the screen. This goes into the normal GameCube power socket and then the GameCube power lead goes into that, meaning one cable is powering both console and screen. This is great as you’re basically only dealing with one long cable, and that’s you’re power supply. 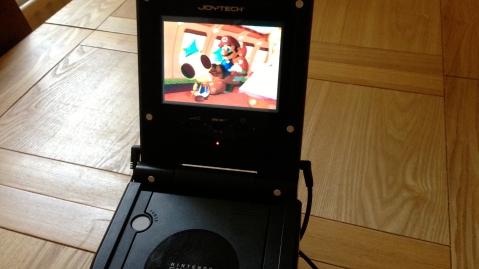 The TFT Monitor claims to output in surround sound. This is a lie. The sound quality certainly isn’t great and you’ll probably want to use a pair of headphones, even if it means more wires. Also you can’t use a Wavebird with the monitor because the receiver won’t fit in the controller port whilst the screen is clipped on. Using a standard controller adds another wire and you’ll struggle to play any games without a controller plugged in. Also it can be difficult to get the screen at the right angle, and if the GameCube isn’t on a stable surface then the weight of the monitor can make it fall over backwards on a bed or something. Pro tip: if you have cushions you can prop these behind the console to overcome this issue and enjoy GameCube in bed. Finally, the GameCube actually makes more noise than you probably realise. When the console is right next to you the sound of the disk being read can be quite distracting.

The TFT Monitor is up there with Hori’s SNES Style controller when it comes to 3rd party GameCube accessories worth hunting down. But whilst the Hori both supply and demand for the Hori controller is plentiful, the GameCube screen can be very difficult to locate. Also it can’t be imported as the screen only works with a GameCube from the same region. It is available in both purple and black, and of the two I think the black one is slightly rarer. I bought mine as part of a bundle that also included the black GameCube, a GameBoy player and seven or eight games. In total this cost me £60 inc p&p. If you do see this item for under £50 I’d definitely recommend a purchase, especially as you might not get another chance to buy one again.