The Tatami Galaxy is highly ambitious. It’s also a huge success, and amazingly every experiment it tries seems to work. Simply listing everything great about it could take a while, but that sure won’t stop me trying. The characters rock, it is thematically and structurally complex, there are parallel universes and they are awesome. In eleven episodes it achieves a staggering amount, and leaves an incredibly powerful impression.

There are a few obvious characteristics that set The Tatami Galaxy aside from other shows, and the most direct of these is the distinct animation and art style. Both director Masaaki Yuasa and animation studio Madhouse are certainly experts at producing high quality content, and both previously worked on Kemonozume and Kaiba, but even then the look achieved with The Tatami Galaxy is distinct. Kyoto is brought to life vividly, the contrasting use of colour between scenes is eye catching, and character designs are unique and memorable.

The next thing most viewers are likely to realise is that there’s little time to appreciate the great art. Subtitles hit the screen fast, and if you want to keep up then you’ll have to read quickly. Each episode is narrated by the protagonist, an unnamed upperclassman at Kyoto University, and he recounts misadventures of campus life at lightning speed. The stream of content is relentlessly dense, and re-watching episodes is unquestionably worthwhile. Each crams in a staggeringly large amount of story, and delivers it rapidly alongside sublime visuals. Initially this can feel like an assault on the senses, but it’s an excellent and satisfying assault. 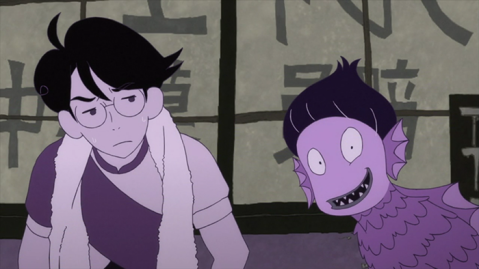 The story The Tatami Galaxy tells is both intelligent and engrossing. Not only does it subvert every anime trope that usually ruins the credibility of comparable works, but the way it portrays the relationships between its characters is complex and intricate. This is achieved through the use of parallel universes, which explore the different opportunities our protagonist can take to achieve the University experience that he desires. Many of the eleven episodes begin the same way; he is in search of the ‘rose-colored campus life’ and joins a University club, from here we see an alternate ‘campus life’ unfold. Each series of events has similarities; the protagonist is usually alienated from the club, mislead by a boy who looks like a fish called Ozu, fails to win over love-interest Akashi, and ends up lamenting when things inevitably conclude on a different variation of terrible – if only he’d done things differently. 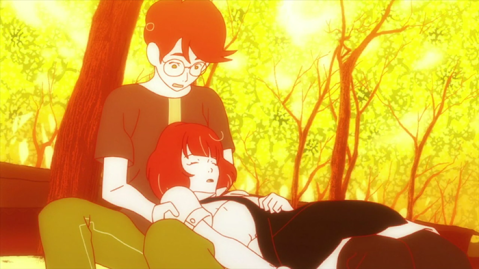 This wish to redo is granted, and watching the protagonist repeatedly make the same mistakes is masterfully entertaining thanks to the show’s excellent sense of humour. It’s particularly enjoyable to watch events become so out of hand that only a complete restart can credibly allow for the continuation of the story. Character relationships are frequently pushed to the extreme, and often contrast dramatically in different timelines. For example in the second episode the protagonist makes a documentary shaming the film club leader Jōgasaki, leading to an unresolvable conflict between the two. In episode three this rivalry does not exist, and Jōgasaki helps train the protagonist for the Birdman club. Here they work-out using the same climbing wall that was a focal point in the shaming documentary.

The Tatami Galaxy’s biggest success is that although characters usually don’t have any memory beyond the current episode’s events, the anime isn’t episodic. Instead the narrative flows in a linear fashion through the different timelines. An obvious comparison to this would be the Remedial Chaos Theory episode of Community, only The Tatami Galaxy does this on a larger scale and the result is even more impressive. Events left unconcluded in one universe are picked up in another, and reoccurring scenes have small changes that help develop the characters and progress the narrative. Meanwhile the show takes pride in delivering meta-commentary on the tropes it is ignoring and the plot formulations it’s deliberately avoiding.

Yet whilst the parallel universes are nothing short of genius, it’s three connected episodes in the middle of the series that stand out and the ultimate highlight. Here The Tatami Galaxy demonstrates its competence in expanding a contained story beyond the standard episode run time of roughly twenty minutes. This elaborate series of events is exceptionally funny, and makes for a surprising change of pace after the show’s initial rhythm has been established. Both here and with its final episodes, The Tatami Galaxy demonstrates a desire to continue experimenting, and the risks it takes repeatedly pay off. 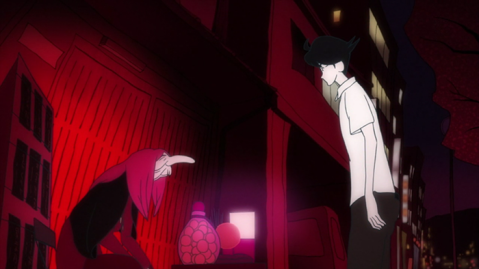 The Tatami Galaxy hits all the right notes on both obvious and complex levels. It looks stunning, sounds amazing and tells an interesting story. This alone makes it worth watching, but it also strives to deliver a level of excellence rarely seen in a show of any genre. It is focused, ambitious, and highly successful in the way it experiments. It is instantly appealing and accessible, but also deep and thought provoking. It cannot be summarised as anything less than a masterpiece. 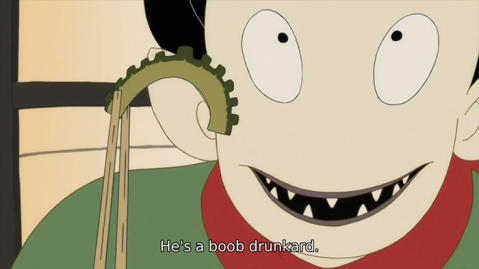 6 responses to “Review: The Tatami Galaxy”