Review: Rise of the Tomb Raider

Prior to its release I’ll admit I was actually pretty excited for Rise of The Tomb Raider. Its predecessor, Tomb Raider (2013), was a great game, but also one with the potential to be expanded into an exceptional one. Unfortunately delivering meaningful progression is hard, and whilst Lara makes the same right moves she did last time, she also gets caught in a few traps when exploring the dangerous tomb of sequel making. 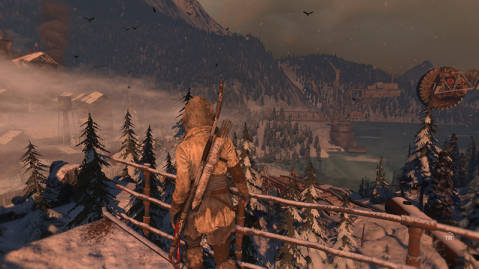 Although nearly twenty years old, Tomb Raider has been rebooted twice, and the latest title only draws heavy comparison to the last game, which it directly follows on from. Yes, you’ve always played as someone called Lara Croft, and there’s tombs and stuff, but other than that we’re talking about two games that have more in common with the Uncharted series (which was ironically once nicknamed ‘Dude Raider’ because of its similarity to TR) than Lara’s earlier adventures.

The games are pleasing structurally; they provide a satisfying blend of action, exploration and platforming – and these elements maintain a minimum level of competency throughout. Rise of The Tomb Raider does a great job of naturally moving between focused linear action based sections, and larger open world areas with options for exploration. In this regard it features the best elements from two different styles of game, and the variety this allows for is great.

It is however disappointingly familiar to anyone who played Tomb Raider on PS3/Xbox 360, or the updated ‘Definitive Edition’ that came out last year. Thanks to the latter version the game doesn’t even have the hardware jump to help make the sequel stand out, and Rise of The Tomb Raider both looks and plays very similarly to its predecessor. And as an Xbox One exclusive (at least for the next year) I missed some of the features that were specific to the PlayStation 4 version of Tomb Raider: Definitive Edition. I’m still yet to find a game that’s made such good use of the DualShock 4 controller, and it combined light and sound in creative ways to add immersion to the experience. Meanwhile the Xbox One controller has slightly improved rumble, but this is a subtle feature, and has been used to greater effect in other recent titles such as Halo 5 and Forza 6.

Whilst looking nice is essentially expected at this point, Rise of The Tomb Raider should still be commended for being a pretty looking game. Lara looks great, she still has nice hair, and there’s some impressive effects on display. But it’s easily the game’s world that stands out as the visual highlight. The level design is smartly structured to incorporate huge vistas, and Lara is often claiming up stuff or moving around stuff only to find stunning landscapes have been moved perfectly into position.

But exploring this world is familiar. This extends beyond simply how Lara is controlled and into full mechanics and systems that are direct copy and paste jobs from the last Tomb Raider. The weapon and item unlocks and upgrades, as well as the levelling system and skill points feel mostly unchanged. Who’s excited to unlock rope arrows… again?

There are admittedly a few new additions, and of these it’s the grapple axe that stands out as my favourite. This gives increased reach when climbing and lets you swing off stuff. Enhancements to Lara’s platforming abilities work well, as these upgrades bring with them new challenges that escalate in complexity. Unfortunately the new weapon and skill upgrades feel like overkill as these are additions you get as well as the arsenal Lara had last time – and even then she felt overpowered during the game’s combat sections.

Kitting out the player with a selection of awesome weapons might sound cool, but oddly Rise of The Tomb Raider also wants to include elements of survival. This doesn’t work, as the game fundamentally shies away from any complex mechanics that could potentially detract from the title’s mass appeal. You can craft stuff and find stuff and manage resources, and make explosives out of cans. Or sneak past a group of enemies, y’know, to save ammo. Except Lara has plenty of ammo, pleanty of resources, and can easily massacre foes with any of the four weapons she’s carrying, that’s if she’s not already smashed their faces in with her pickaxe. 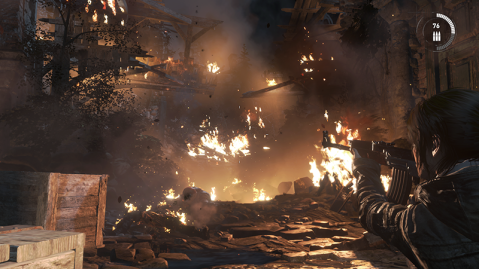 Lara never feels either vulnerable or in danger, and as a result the theme of survival is a burdern left entirely for the narrative to carry. Lara falls off stuff and hangs off stuff, she rolls down stuff and nearly gets crushed by stuff. That’s most of the cutscenes coeverd. Of course she’s always fine, and seconds later you’re back in control of what as well might be a walking battle tank.

Because of this the story feels melodramatic, and it’s not the only area in which there’s a disparity between what the game tells you and what you’re actually doing. There is, for instance, a new language skill which Lara can upgrade to translate texts found on large obelisks, which point out the location of hidden treasure. Early on I found one such obelisk, but as I was only Level 1 Greek I couldn’t yet translate it. Around the corner I found a box with a crown in it, ‘Congratulations’ the game said, ‘You’re now Level 2 Greek’. Yes, evidently finding that crown was enough for Lara to realise she can speak enough Greek to translate the large obelisk.

There’s also the fact that Lara’s motivations for travelling to Siberia are questionable at best. Last time around the writing wasn’t much better, but at least Lara’s situation was understandable – she was trapped on an island and needed to escape. This time she’s getting herself into trouble, and the narrative goes to great effort in trying to convince the player that her adventure is a necessary endeavour as Lara must fulfill a legacy left by her father or something.

I was left unconvinced, and other than Lara’s desire to prove that a magical artefact is real, it’s not quite clear why she’s out in Siberia killing bears, people, and anything else in her way. Meanwhile the one-dimensional villains want the artefact to achieve immortality (because one of them is dying of a cough, apparantly), and there’s also a boring tribe who want to protect it, and they too seem confued as to why Lara Croft is here and what she want’s to do with it.

As with its predecessor, the best element of Rise of The Tomb Raider is the game’s optional tombs. These are smart, well-crafted puzzles that require just enough thinking without feeling obtuse. However like the last game, their status as ‘optional’ feels like a criminal disservice. Here again the game is stuck between delivering an immersive and complex experience, and providing a crowd-pleasing Michael-Bay walk-in-a-straight-line simulator in which the only ‘puzzles’ involve explosions.

If the idea of raiding tombs isn’t something you like the sound of, then surely play a game that isn’t called Tomb Raider? Raiding them tombs really is the crux of the experience, and thanks to the care and detail in their design, these areas are the best part of the experience – as they rightly should be. Having them marginalised as ‘optional content’ is perhaps a worrying statement on the perceived intelligence of the game’s audience.

I did enjoy my time with Rise of the Tomb Raider, but it wasn’t quite the sequel I expected. It succeed in providing more of the same, and this is a great formula that provides a variety of elements that all work at least reasonably well. There are some new ideas, and some of these are great, but there’s also a missed opportunity for experimentation and expansion. Many areas such as the combat and story still lack substance, and the potential for improvement remains. Still, at least the awful multiplayer is gone.