F-Zero GX was developed by the video game equivalent of a supergroup. Ten years previously the idea of Mario and Sonic developers joining forces to create the fastest and most intense racing game ever made would have been considered about as likely as Sony and Microsoft teaming up today to end world poverty. Oh, and Namco were along for the ride too. The collective genius of these insanely talented people resulted in a unique and masterful game, and twelve years later it’s still at the top of its genre.

On the Nintendo 64 F-Zero X was a really great game. However the sequel had some of its work cut out – due to technological limitations the series’ first 3D entry was far from perfect. Having thirty racers at sixty frames–per–second was undoubtedly impressive, and the game was great fun to play, but the overall look and feel was sacrificed to achieve this. This meant a lack of detail in the ships and tracks, as well as bland or non–existent environments.

The most noticeable improvements F-Zero GX makes over its predecessor are obvious; vivid environments and creative locations that are dynamically brought to life. There’s now a sense of an imaginative futuristic world that exists outside of the tracks you can race on, and these courses are varied in both how they look and how they race. Mute City never felt so real, and sits well alongside new locations such as Casino Palace and Green Plant. Add to that a kick–ass soundtrack and you’ve got about half the reasons why F-Zero GX is incredible.

The game’s mechanics are inherently fun, and here it has to do little more than refine what already existed to deliver a pretty much faultless experience. From its origins on the Super Nintendo the game has evolved in a natural and fluid way, transitioning well into 3D and culminating with an experience that feels so natural to the GameCube that it’s easy to forget how it also offers strong continuity for the series.

The additional graphical fidelity means both a greater sense of speed, and the very possibility of controlling faster ships. The handling is super satisfying, the shield/boost mechanic is as smart as ever, and there’s a new slide attack that allows you to effectively destroy your opponents with great efficiency.

This plays well with the game’s approach to difficulty. F-Zero GX is an exceptionally hard game, but one that demonstrates the mastery involved in implementing challenge in a meaningful way. Making a game hard is not necessarily a skill in itself; it is no different to making a game of any other difficulty – and easier than providing a balanced and thought–out challenge. Difficulty is in many cases nothing more than parameters; the programmer could double the health bar and call it easy mode, or half it and call it hard.

With F-Zero GX the A.I speed and skill is pitched several notches higher than your standard racer, but this is counterbalanced by some generous victory requirements. Taking the gold cup does not mean you’ll need to first–place all the races – far from it. Anti–gravity racing is of course meant to be dangerous and unpredictable, and this is smartly reflected in both the rules that govern the player (eg. having to restart if you fall off the track, or the option to boost yourself to death) and those that govern your opponents, who lack consistency between races and don’t respawn if destroyed.

You’re encouraged to ram your rivals (handily indicated in–game) into oblivion, and as long as you yourself finish they’ll be netting a total of zero points for that round. Even if you’re not making the kills there’s no guarantee that last race’s winner will replicate their success this time around. This means that even if you’re not scoring podium finishes, consistent and aggressive racing can still easily result in an overall win.

On the harder difficulties this makes for an intense experience, both because of the pressure to destroy rivals, and because you’ll almost never find yourself out in front. Racing games have experimented with numerous techniques to keep events competitive, for instance rubber banding in Mario Kart or the staggered opponents in Wipeout, but I like F-Zero GX’s solution the best. There’s always someone ahead you’ll be trying to overtake, but when you don’t need a first place to win the championship, this isn’t frustrating. 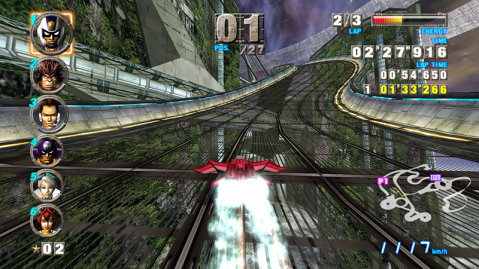 F–Zero GX is easy to get into, and a game that needs to give you little motivation to try and master it. However that motivation is still there, and for those ready to overcome the game’s toughest challenge (the appropriately named ‘Master’ difficulty) there’s a big reward to be found.

Usually developers have strong incentive to put the cool stuff near the beginning of their game, as more people will play this than the later levels. Very few titles restrict a large amount of awesome content behind some incredibly tough unlock requirements. But F-Zero GX was developed in conjunction with an arcade counterpart; F-Zero AX, and everything from this arcade game is hidden away on the GameCube disc.

Naturally an easy unlock would have been detrimental to the success of F-Zero AX, and this additional format allowed the content to be enjoyed by gamers of any skill level. As part of the F-Zero GX experience it adds a lot, both in the way it extends the size of the game, as well as the extra level of variety and imagination it delivers. The AX Cup includes a level set in Outer Space and an additional Lightning track that contrasts some wide straights with some super sharp corners – two highlights from a tournament in which every track is great.

Whilst the AX Cup is rewarded for completing the previous cups on Master, the arcade ships come from Very Hard mode in the game’s story. This story takes a back seat to the Mario Kart structured tournaments that make up the bulk of the game, and is basically a mission mode framed in the context of a rather strange narrative. Each level is short but requires an often frustrating level of precision to master, and whilst they overall add to the game in terms of variety, these levels are often too fiddly to be enjoyable.  The over produced CG cutscenes that bookend each event do little to add to the game, but as they can be skipped they don’t really detract from it either. Whilst mostly unremarkable, there’s a very odd bit at the end where Captain Falcon faces off against a God–like spirit composed of the three developers, but this strange piece of meta–commentary feels like it touches upon complex issues mostly by accident. 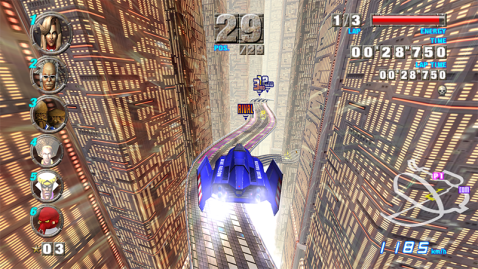 Other modes and options frame the core game nicely, such as a large library of ships to unlock, and a rudimentary yet still quite cool ship builder. Still, when it comes to listing the best things about F–Zero this stuff will always come below the main selling point; that you can race spacecrafts at literally a thousand miles an hour against twenty nine opponents and it looks incredible and is exceptionally fun.

F-Zero GX is still the pinnacle of Nintendo’s legendary franchise, and the best futuristic racing game ever made. The entire experience is perfectly crafted; everything feels how it should, meaningful challenge has been boldly integrated, and the tracks have been ingenuously designed and stylised. Over ten years later and a part of me thinks that the real reason we’re yet to see a home console sequel is that Nintendo knows nothing will ever top this.