In balancing retro aesthetic with modern mechanics, Hyper Light Drifter stands out as a notable success. Its striking visuals, open ended design and fast, punishing combat makes for a unique experience, but the comparisons to other great videogames are also plenty. Think Fez meets Dark Souls meets The Legend of Zelda: A Link to The Past, and be very excited.

The moment the training wheels come off is a jarring experience in Hyper Light Drifter. After a twenty minute tutorial you’re placed in the middle of the map, and with no explicit guidance you’re free to explore in any one of four equally alluring directions. The initial sense of vulnerability is a key component of many classic adventure games, but here it’s matched by a complete lack guidance. There’s no dialogue, and everything from your objective to the upgrade system is deliberately unclear.

The world is vast, and overflowing with both secrets and dangers. In this regard it invites comparison to Phil Fish’s Fez beyond that of the clear audio and visual similarities. Incidentally Disasterpeace composed the soundtracks for both games, and his distinct (and excellent) style makes for a notable atmospheric link between them.

What sets the games apart (beyond calling Fez Mario and Hyper Light Drifter Zelda) is that in Fez the world’s secrets exist across the far edges of its periphery, and the pathways there are guarded by complex and intricate puzzles. In Hyper Light Drifter you are assaulted with secrets, they are found everywhere and a single step outside of the game’s central hub is a step into dangerous and uncharted territory. 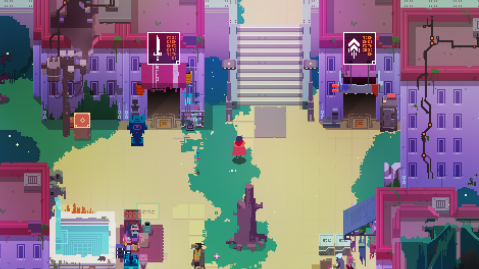 The sense of foreboding is partly atmospheric, and partly very real danger. Enemies are tough, there’s lots of them, and if you’re not fast at dodging attacks then you will die. You can also wander off into hoards of strong foes when you’re only an hour into the game and have no upgrades and no idea what you’re doing or where you’re supposed to go. You’ll probably end up dying. At times this can make for a frustraiting experience, but this design also gives value to even your small successes in the game’s harsh world. After clearing a tough room I’d frequently feel a sense of disbelief that every enemy was now dead and I was somehow still alive.

Of course it’s impossible to talk about a game where enjoyment comes from repeated punishment without mentioning Dark Souls – the series that popularised this insane idea. Here too there are moments where it’s easy to feel as though the game has a blatant dislike for the player, or at best an ambivalence. At one such point I found myself with minimal health, halfway through a dungeon, and one screen away from a room full of enemies that were repeatedly killing me. After about ten retries I realised that in the corner of the spawn room was a hidden area, and inside was a health pack. My surprising realisation was that maybe Hyper Light Drifter didn’t hate me quite as much as I’d thought.

Learning enemy attack patterns is essentially the key to success, and as with Dark Souls you’ll generally be okay as long as you don’t get hit. That’s of course easier said than done, and what’s particularly challenging is how enemies will gang up on you, often resulting in consecutive blows landing within fractions of a second, reducing your health bar brutally fast. Because of this the more enemies you’re simultainously faced with effectively causes the difficulty level to increase expenentially.

Fortunately most foes die reasonably quickly, and encounters are a mad mix of dashing, slashing and shooting. Thankfully this is never quite at Hotline Miami’s level of reflex/retry, although it’s still fast and unforgiving. But whilst in Hotline Miami the same player action frequently result in a different outcome, Hyper Light Drifter is less frustrating. Combat is fairer, and the process of dying and respawning isn’t debased into a sort-of pseudo save state system.

In asking so much of the player, particular attention is drawn to Hyper Light Drifter’s own game design. After all, for it to get away with demanding such a large investment of concentration it must be super fun and rewarding, right? For the most part Hyper Light Drifter is mechanically sound, and succeeds at being both these things.

There’s a couple of small issues, the most obvious frustration probably being that your character’s position on the map looks exact but is only an approximation, and this can make exploration confusing. But overall this is a game that has been carefully designed, and great thought has gone into making it a worthwhile experience that rewards player commitment. I love the multi-layered, complex levels, the variety of enemies, and the mix of sword and shooting combat. Not only do these components work well, but they work together to create a great experience.

Yet the main reason the game initially drew me in is not its mechanical competence. Rather it’s the same reason Bloodborne got me hooked last year; it looks magnificent. This shouldn’t be understated, Hyper Light Drifter isn’t simply a good looking game – it’s beautful. Every single frame in every single location looks like a work of art, and it’s hard not to get immersed in a world that’s so spectacular to look at.

In some scenarios this is why Hyper Light Drifter gets away with what would otherwise be abrasive design. It’s why I quickly got over and subsequently learned to understand the unexplained upgrade system, and why I didn’t need an initial objective to motivate me into adventuring. It’s well hidden behind gorgeous pixel art, but after the training level you have an introduction that’s more similar to The Legend of Zelda on NES than it is to A Link to The Past. Take sword, go in direction of choice. And yeah, it’s dangerous to go alone.

The most notable difference between the two games is that every area in the original Legend of Zelda is brown and looks basically the same, where as every area of Hyper Light Drifter is a neon-pixel masterpiece. This includes the character and enemy designs, the interface and menus, and the game’s incredible logo. Oh and that soundtrack by Disasterpeace is brilliant too. There’s so much to be in awe of; Hyper Light Drifter is stunning. 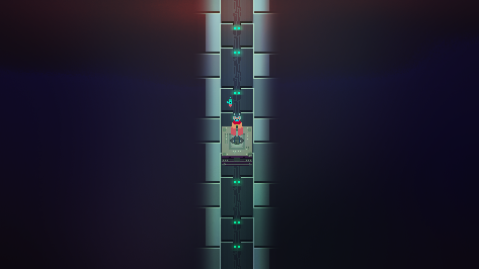