Senran Kagura is quickly becoming the most controversial series no one is paying any attention to. Hidden away in its niche genre is a game that from the outside appears indistinguishable from any other obscure Japanese anime release. But Senran Kagura’s overt sexualisation of its all-female cast is perhaps enough to surprise even fans of the genre, and to everyone else it’s likely to come across as perverted to an extreme level. The biggest shock? That behind the oversized boobs and dirty dialogue is a competent brawler that’s actually quite a lot of fun to play.

It’s difficult to talk about a game like Senran Kagura without the review turning into a debate over the ethics of sexual content in videogames. It doesn’t help that this is an issue which is ultimately linked to any potential enjoyment of the title; if the idea of sexy young girls with bouncing boobs makes you want to grab a pitchfork then you almost certainly won’t like Senran Kagura: Shinovi Versus.

But before we slide into this inescapable discussion, I’d better quickly say the most important thing I have to saw about Senran Kagura. Even if all sexual content was removed, and the game brought down to a strictly PG level, I’d still have really enjoyed playing it. 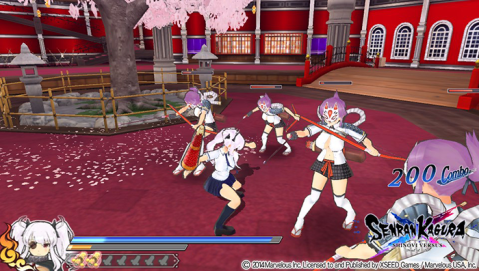 The gameplay itself is almost entirely combat driven, and although simple, it’s a lot of fun and has surprisingly deep mechanics. Some aren’t explained all that well, but once you start to understand how they work it becomes a tactical and enjoyable experience. For instance there’s the shinobi transformation, which can be used once per battle and transforms your character into their stronger shinobi counterpart, giving them new moves and special attacks. The thing is that the shinobi transformation also fully restores your health, and waiting to use it until your HP is low can be the secret to overcoming a difficult battle.

Then there’s frantic mode, which enhances your ability to both give and take damage. This is the ultimate risk/reward state, and can be used to clear stages quickly and achieve the highest rankings. Using these modes correctly is combined with a simple yet fun fighting mechanic where you perform combos by launching enemies into the air before dashing after them and continue to attack. Add to this the need to block enemy strikes and you’ve got a system that’s complete strategy, and combat that never feels like simple button mashing. 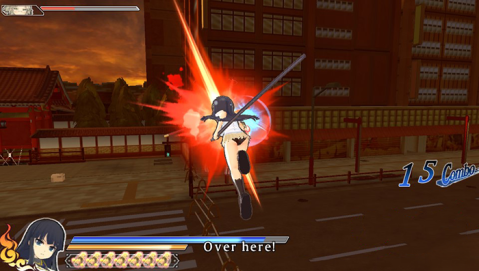 Whilst the gameplay will be familiar to anyone who played Senran Kagura: Burst on the Nintendo 3DS, some huge steps forward have been taken since the original. The game’s world has been transformed into full 3D, and the core elements of the first game have been significantly enahanced. There are now occasionally issues with the camera, but thankfully there’s a lock on mechanic that helps ensure you’re facing your enemy at least some of the time.

Also returning from Burst are the basic RPG features that allow you to level up the characters by completing missions. This works well as it’s never over emphasised, and feels like a small addition of depth to a game that could otherwise feel like it lacks progression. Although the story mode is largely linear, each character has its own set of missions which can be accessed at any time. Although billed as side quests, this content feels more like an arcade mode, and lets you jump into a series of fights and level up quickly. Mixing this with the main story somehow manages to achieve an illusion of variety, even though every mission is basically the same.

Although repetitive, Senran Kagura is still a massive game. There are several shinobi schools to choose from, and each has its own story and selection of characters for you to level up. Structurally this works well for creating a game that’s easy to sink a lot of time into. Admittedly the specifics never feel quite right (eg. What level should I even be for this mission?) I always felt like I was progressing well though the game, and enjoyed the steady stream of unlocks, the fast moving story, and the quick leveling.

The story itself is mildly interesting, and for fans of Burst it follows on and stuff. It’s not good enough for you to worry about starting at the beginning however, and even if you don’t want to pay full attention you can skip past half of it and still enjoy the occasional piece of dialogue. I mean overall the writing isn’t great, but was anyone really expecting Shakespeare? Occasionally it’s funny, occasionally it’s rude, and although it can go on too long at times I’m sure some people will find some form of enjoyment from it.

Okay, onto the naughty bits. As you’re fighting both you and your opponent deliver attacks that rip off each others clothes. There’s even a system behind which garment is removed, corresponding to specific attacks. These are accompanied by sexualised animations where the girls and exposed, their boobs bounce a bit, and they make high pitched noises. Visually the game falls short of displaying any full nudity, but comes closer to doing so than I had previously though possible.

The strong link between sexualisation and violence is the first point of concern. But what’s perhaps worse is the degree of interaction the game allows for, in particular when entering the frantic mode I described earlier. What I didn’t mention is the reason your character becomes frantic in the first place is because you’ve used the PS Vita’s touch screen to rip off her clothes. This action is probably the most controversial part of Senran Kagura as although the game always falls short of hentai in terms of graphic content, here you’re given a degree of interactivity above other types of media. It’s a bit like how killing prostitutes in Grand Theft Auto is not okay, but watching a violent movie where prostitutes are killed is probably fine as you’re not actually doing it. I think that’s what the fuss was about anyway.

Howeve,r unlike the hyper violence of Grand Theft Auto, which can be enjoyed by every type of person, Senran Kagura fits into a niche genre of Japanese games. This does however cause a clash over the differences between what’s culturally acceptable in Japan versus the west. I’m specifically talking about the ages of the girls depicted in the game. 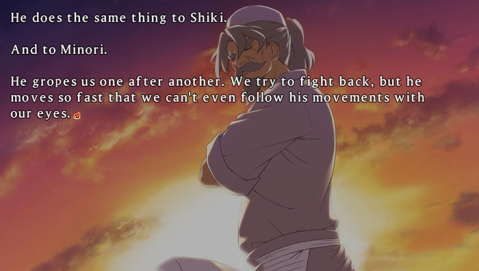 You might consider it creepy, or maybe totally unacceptable. It’s certainly ironic that the game carries a MA 17+ rating when no one over that age should be lusting over its characters. Of course I’m not saying kids should be playing the game either, although as a digital only release (at least in the United Kingdom) I bet it’s well easy for them to download it. As a fan of physical games over their digital counterparts, I imported the appropriately titled ‘Let’s Get Physical’ edition of the game from America, which includes a pervy art book to round off your Senran Kagura experience.

So overall Senran Kagura sexualises underage girls and can be easily accessed by gamers of all ages without even leaving the house. Of course if you’re looking for actual nudity there’s this thing called the Internet which is way worse and the kids have that too. So if you’re interested in picking up Senran Kagura, do so because it’s a fun game that fits in well with the Vita’s growing library of diverse, interesting, and just plain odd Japanese games. 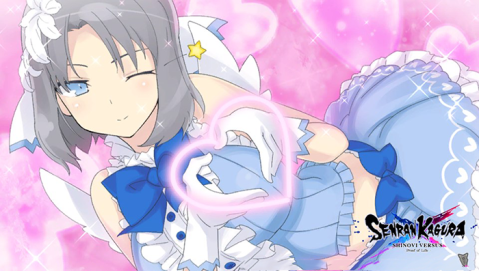