Persona 4 Golden isn’t like other RPG games. In fact, I can’t think of anything that comes close to matching the levels of depth and accessibility that are perfectly blended together in Atlus’ masterpiece. Part highschool murder mystery, and part dungeon crawler, Persona 4 sets you out on an unforgettable adventure where you must stop a serial killer and uncover the truth behind a supernatural television channel. 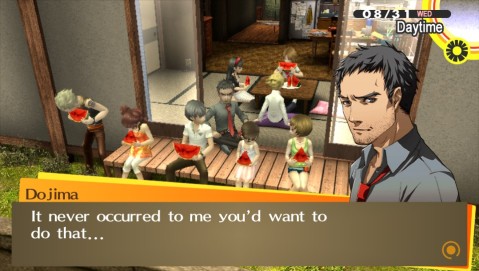 Set in the small town of Inaba, Persona 4 begins as you start your new life in rural Japan. The recently opened department store has caused half the shopping district to close down, and other than that not much is going on. Oh, and it rains a lot. It’s a subtle yet brilliant setting, and it’s one of the reasons Persona 4 is so easy to fall in love with. The game is drenched in atmosphere, and right from the start you’ll get lost in its unique world. The soundtrack is phenomenal, and the combination of these elements is haunting.

The story itself is also superb, thanks to a brilliant balance between linear narrative and player dictated events. There’s just enough choice to make everything feel specific to you, but at the game’s heart is a wonderfully written and engaging plot. Every player should discover it for themselves, so I wont say much other than that it’s an intelligent murder mystery with some great twists. 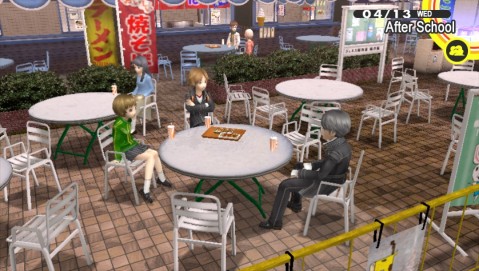 Mechanically the game is similar to Persona 3, although there are enough tweaks to ensure that this is the superior title. By day you’re living your life and deciding how to spend your free time, and by night you’re dungeon crawling inside a mysterious world located within the television. These two elements are tied together nicely by the story, and the variety makes the game incredibly addictive. Just when you think you’ve had enough of suburban life, the game’s tone will change and you’ll find yourself battling monsters and levelling up your Persona inside a massive dungeon.

Standard RPG mechanics are enhanced by unique elements only found in the Persona series. The friendships you build up in the real world effect your skills inside the television, and there’s a deep Persona crafting/fusing component that unlocks new skills and abilities. As the game is so enjoyable doing so feels worthwhile, and whilst things can get complicated there’s a reasonable learning curve that means new players don’t need to feel intimidated.

If you played the original version of Persona 4 on PlayStation 2 then there are several new features exclusive to the Vita. There’s a new character, an extra dungeon, additional story, and an extended ending, which in total amounts to over ten hours of additional content. However, some of this takes some serious time to unlock, and is completely missable if you don’t know what you’re doing (here’s a guide to make sure this doesn’t happen). This extra stuff is completely awesome, but returning players are most likely going to find the improved graphics and interface to be the most noticeable changes at first. The game looks brilliant on the PS Vita’s small screen, and the gameplay is well suited to a portable console.

There’s literally nothing bad I can say about Persona 4 Golden. It’s an epic RPG with great graphics, an amazing soundtrack, a gripping story and addictive gameplay. A single playthrough could easily take you over eighty hours, and virtually no other game can match the immense quality achieved here for such a lengthy amount of time. Persona 4 Golden is easily worth buying a PlayStation Vita for, and it’s one of my personal favourite games ever.