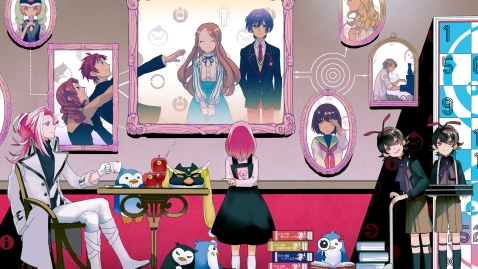 For a show that largely revolves around the magic powers of a penguin shaped hat, Mawaru Penguindrum actually leaves you with a lot to think about. It has a strange mix of fantasy and reality, wrapped up in a visually stunning package that is thematically complex and full of symbolism. Whilst not without some pretty major flaws, this is an ambitious show that for the most part is great fun to watch.

The story follows two brothers, Kanba and Shōma Takakura, who are looking for a mysterious item known as the Penguindrum, which will save their terminally ill sister Himari, who is being kept alive by a magical penguin hat. It sounds ridiculous, but at the same time the show presents the viewer with some very real issues, and shouldn’t be dismissed as pure fantasy.

What you do have is a large contrast in the thematic content of the show, and when this works it works very well. It’s particularly interesting to note that the magical penguins who assist the Takakura siblings have virtually no influence on the narrative, and for the most part Mawaru Penguindrum focuses on real life issues. The first few episodes become heavily grounded in a story about a girl named Ringo who is stalking her teacher, and watching her impossible romance develop is immensely interesting. Meanwhile the magical penguins spend their time reading pornographic magazines, wearing women’s underwear, and eating octopuses. This all happens in the background, and acts as a nice comic element subtly used throughout the show’s 24 episode run. 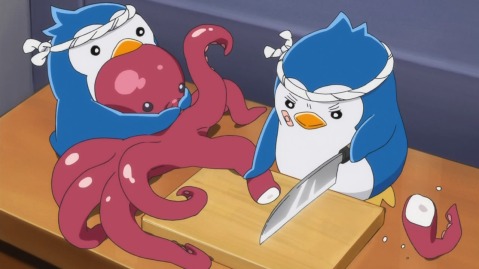 The comedy works well, but when the show starts to deal with elements of fantasy, problems begin to emerge. This is because the actual rules of how magic works in Mawaru Penguindrum are never explained, and what it can achieve is never quite clear. In particular the second half of the series gets bogged down by strange elements such as a destiny altering diary and a giant shredder that children are being funnelled into.

And to be completely honest I’m not really sure where the metaphors end and the really crazy stuff that actually happened begins. The show does partially succeed when it comes to symbolism, but offers unsatisfactory resolutions to many of it’s storylines. There are many subplots rooted in real world problems, but the solutions are often unsatisfactory. For example, at one point a girl is struggling to cope with an abusive father. This issue is resolved when a magic diary is used to erase him from existence. It’s simply not applicable to real life, and as the actual power of the diary had never been specified the result feels a lot like Deus Ex Machina. 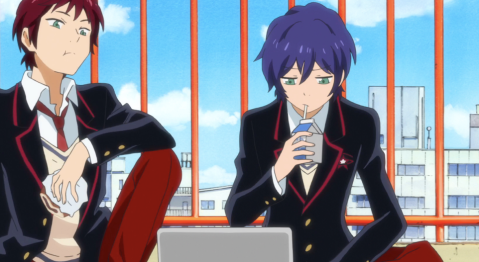 But maybe that’s kind of the point, and Marwaru Penguindrum has many structural elements borrowed from greek tragedy. This doesn’t always work, but does result in a pretty decent and fairly haunting ending.

Still, there are certainly a few bumps in the road getting there. Mainly the second half of the show suffers from a poorly written narrative that starts moving backwards as much as it does forward. One episode in particular ends on a large cliffhanger, only to be followed by an entire episode of flashback/filler. As the flashbacks become more and more frequent the story slows down pace, and the actual events we see unfolding feel contrived. It quickly tuns out that everyone was connected to each other in endless ways, and all have notable pasts that should have perhaps been explained earlier. 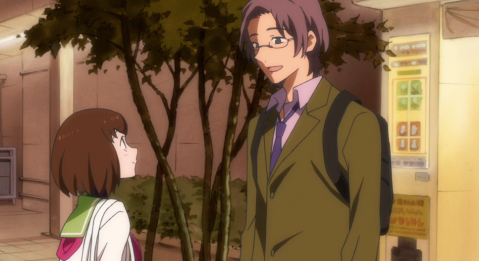 Marwaru Penguindrum is worth watching for Mr Tabuki alone, although there are certainly many other reasons to enjoy this anime. The presentation is superb, and as well as the audio and visual charm there are some great characters and interesting storylines. It can’t keep up with the pace set by the first few episodes, but a decent ending holds everything together, even if things get a bit shaky at times. Shall we begin the survival tactic?