So I’m going to try something I’ve not done before – that’s covering five movies in one review. Code Geass: Akito the Exiled is a series of five hour-long films that saw theatrical screenings in Japan and recently concluded after five years of releases. Collectively they tell an epic war story set between Code Geass: Lelouch of the Rebellion R1 and R2, bridging the gap between the two anime series. 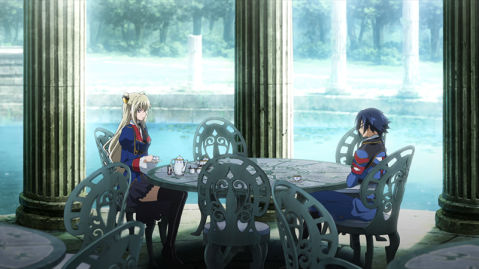 As a side story Akito the Exiled complements the original Code Geass narrative well. Although I’d like to deny it, Lelouch’s story has been fully concluded, and the film’s strengths largely lie in how they expand the Code Geass universe without retreading too much familiar ground. The setting is moved from Japan to Europe, where a corrupt aristocracy rule and war rages against the Britannian Empire (for those new to the series, or who may need their memory refreshing, this was originally America in the super-complicated Code Geass alternate timeline). Akito meanwhile is a Japanese refugee with a troubled past, and he pilots a mecha on a series of dangerous and action-packed missions.

His brooding personality reminded me of Makoto in Persona 3, although due to the influence of Geass his character frequently flips between melancholic and completely psychopathic. As with the original series, the exact specifics of how this power works are unsatisfactorily vague, although this time around the confusion somewhat compliments its uncontrolled and increasingly chaotic use.

It’s Leila, the commanding officer and strategist for Akito’s unit who initially comes off as the most compelling character. In particular in The Wyvern Arrives (film #1) her plights are interesting and multi-layered, especially compared to Akito who reduced to the role of moody bodyguard. This almost works; having a strong female lead is a brilliant comparison to the anime series as you’ve got a protagonist that contrasts with Lelouch, rather than attempting to compete with him. What’s disappointing is that a lot of the drama built up in the movie is never capitalised on in the sequels. At one point it’s mentioned that Leila is going to be forced into an arranged marriage with her step-brother. This isn’t brought up again. 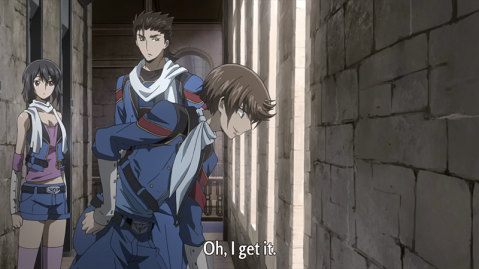 The rest of Akito’s team is composed of Japanese rebels after Leila convinces them to stop being rebels and instead join her noble unit that repeatedly undertake suicide missions fighting for the prosperity of the corrupt European bureaucracy. Their transition from cold-blooded murders into soldiers completely loyal to the person they were initially trying to assassinate is unconvincing, and as the show continues the modus operandi seems to be a mission of converting and recruiting the bad-guys, rather than actually killing them.

Although a wealth of villains are initially introduced, it’s their leader Shin who takes up nearly all the focus, and he’s got everything from the Geass powers to the complex relationship with Akito to the solid gold centaur mecha. Yeah, that’s right.

Whilst the robots themselves, which mostly look like a cross between Power Rangers and Transformers, are an exercise in tastelessness, the fights are undeniably spectacular. Akito the Exiled is a total of five hours long, which is comparable to a twelve episode anime series, but it has the budget, presentation, and high production values you’d associate with film – not television. Nowhere is this more evident that in the action sequences, which are epic battles that make superb use of 3D computer graphics to deliver spectacular visual effects.

Each of the five movies includes at least one awesome mecha fight. Whilst The Brightness Falls and To Beloved Ones (films #4 and #5) are almost all action, it’s the short-but-sweet concluding movie #3 that I probably enjoyed the most. Oh and the rocket launch in The Wyvern Divided (film #2) is particularly stunning. Succumbing to every anime trope humanly imaginable doesn’t really seem so bad when it’s followed by sequences that looks and sounds that good.

There is admittedly an anomaly in the series, and it’s The Brightness Falls (film #3). Here the story gets sidetracked when the main protagonists get locked out of the military base and as a solution to this problem they go and live with a group of gypsies in the woods for a couple of months. Yes, you read that right.

If the run time was longer I could maybe understand this kind of filler a little better, but it’s a detour that takes up the entire first half the movie. Now all five are released this maybe isn’t so much of a problem as it was when the story progressed in yearly increments, but it still feels like a waste of time. It also oddly contrasts with an extremely exciting second half that puts some characters from the anime show back in focus to deliver the overall high-point of the series.

Whilst primarily an original story, Akito the Exiled does include interactions with the original cast. These range from brief cameos to slightly more significant roles for Lelouch and Suzaku. For those looking for additional character development and detail, these scenes may ultimately disappoint (for example Lelouch is mostly out of his mind for all five movies, and he and Suzaku spend the entirety of one inside a prison cell), their links to Akito’s story give a great sense of the Code Geass world, and help fill in the year-long gap between the two series.

What I really like is that whilst so much of Akito the Exiled feels new and original, it’s still grounded with references and comparisons to the anime. There’s a stupid chess scene, because, y’know ‘strategy’, tactics that don’t make any sense but work, obviously, and characters magically obtaining Geass powers just when they need them the most. There is however no Pizza Hut.

Akito the Exiled is so many things that it’s hard to know exactly what to make of it. As a companion piece to Lelouch of the Rebellion it’s ultimately pretty great, and as a spectacular and entertaining series of films it succeeds too. Otherwise it abandons logic and sensibility to deliver a trope-filled and frequently incomprehensible tour-de-force that sets jazz music to its intense thrills and then winks at you with a crazy Geass infected eye.