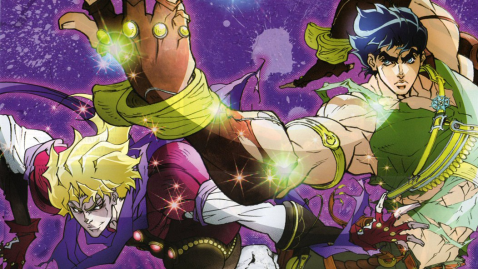 It’s been a long while coming, but after 25 years of manga the Jojo’s Bizarre Adventure anime has been well worth the wait. This is an ambitious and focused retelling of an epic story, beginning right at the start and covering the manga’s first two volumes; Phantom Blood and Battle Tendency. Filled with style and character, this is a show that will please both newcomers and fans alike. 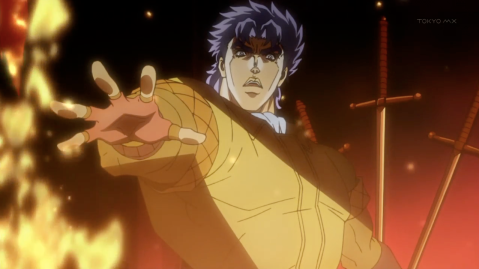 If you’re not already familiar with the story then I’d honestly recommend just jumping into the show with as little knowledge as possible. It’s an unpredictable and exciting tale that constantly changes direction, and ends in a drastically different place to where it starts. You won’t see the twists coming, and at times the writing is nothing short of fearless. Sure, it doesn’t always work, but when it does the payoff is huge.

Because of this it’s very difficult to briefly sum up what exactly Jojo’s Bizarre Adventure is exactly about (without spoiling the twist of what makes Phantom Blood different to Battle Tendency). It begins with the rivalry of two brothers, and the story of their relationship feels almost like a fairy tale that set’s the rest of the show’s events in motion. This is the focus of the first three episodes, although enough content for an entire series is burned through, and it makes for a very strong introduction. 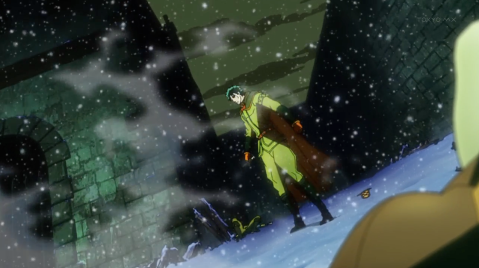 Unfortunately the show’s pacing is not retained, and things speed up and slow down almost at random throughout the second half of Phantom Blood and all of Battle Tendency. Some episodes span huge lengths of time and depict several important events, whilst others are dragged out by lengthy battles that meander towards a predictable conclusion.

But for the most part Jojo’s Bizarre Adventure has enough style to hold everything together, and even when the plot fails to progress, things generally remain entertaining. In fact, one of my favourite episodes covered events that a lesser show would have failed to make even remotely entertaining. The episode focuses entirely on Jojo’s training, and he is tasked with climbing up a pillar made out of oil (which is about as stupid as it sounds). Despite the ridiculous premiss, I got lost inside this small and strange story, which was fundamentally compelling and enjoyable to watch.

Whilst the plot might have its inconsistencies, the show’s humour and style remain on top form from start to finish. There’s also a satisfying ending to the series, which may surprise you if you’re not familiar with how the manga operates. It might be another ten years before the next six volumes are turned into anime, but you won’t have to wait that long to see the first series’ events fully concluded. Combine this with a few adult themes, some great dialogue, a couple of shocking moments and some decent twists, and you’ve got a show well worth your time, and one I’d be happy to recommend. 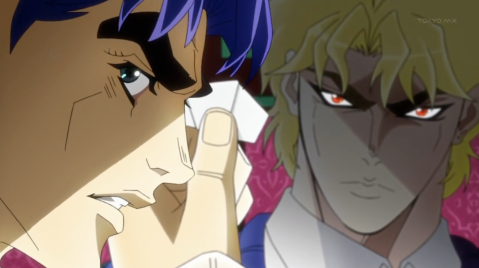