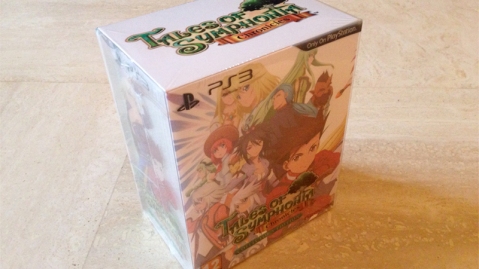 Is there any greater sign of excess than the collector’s edition of a videogame? And I mean a real collectors edition, the kind that has fancy packaging and a figurine or two, not a download code for an extra multiplayer map or shiny coloured gun. This week I’ve indulged myself with the remake of my favourite GameCube RPG (and its fairly average sequel on the Nintendo Wii). I present you with the Tales of Symphonia: Chronicles Collector’s Edition. 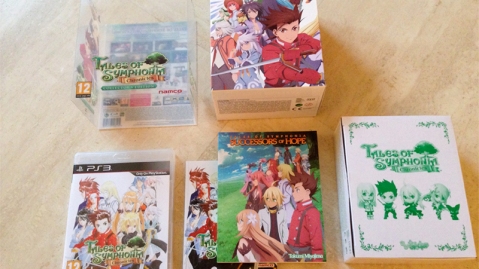 What’s in the Box?

The Tales of Symphonia: Chronicles Collector’s Edition is packed full of goodies, almost enough to justify its extortionate £70 price tag. As well as the standard game you have two bonus discs worth of soundtrack, a novel titled Tales of Symphonia: Successors of Hope (which bridges the events of the two games), and a set of four figures (five if you include Tenebrae but he’s pretty small).

Unlike the US version of the collector’s edition, which includes a four disc soundtrack, the European version only has two CDs. These are packaged inside the game’s box, rather than a separate case. This version also doesn’t include the steel book case or art booklet, pretty lame, right? Perhaps the only real upside is that less of the European version were made (10,000 as opposed to 18,000 US copies) making it technically rarer and theoretically more desirable.

I’ve not read Successors of Hope just yet, and I’m not sure if I ever will. I don’t really have the time for it and would rather keep it as a collector’s item. Oh, and the book on the left is the game’s manual, if you were wondering. It can’t fit in the case because the soundtrack takes up all the space.

The figures require a bit of assembly. It’s a bit jarring to open up the box for the first time and see their giant heads dismembered from their tiny bodies. Each comes with a small stand and a stick to help prop them up, which keeps them in place better than I’d have thought it would. Without it they simply fall over. As a set they look pretty good together, although individually they lack the detail that made, say, the Ganondorf figure included in the Wind Waker Collector’s Edition so impressive. 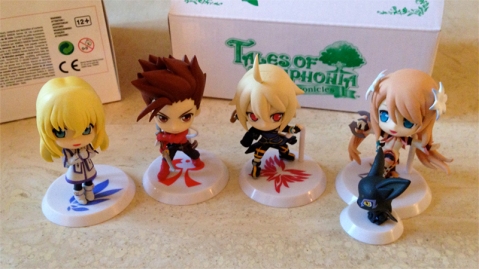 Overall the Tales of Symphonia: Collector’s Edition is an impressive package, with the only major downside being that the US version included more stuff. It’s a high quality product with impressive presentation values, and the game is pretty good too. Whilst not all ‘Collector’s Editions’ actually turn out to be that collectible, RPGs are usually a safe bet, and Tales of Symphonia has already proved itself as a classic.

If you’re after the collection yourself, have a look for one on eBay here

One response to “This Week’s Purchase: Tales of Symphonia: Chronicles Collector’s Edition”