I’m usually not a sucker for these ‘Limited Edition’ boxes, but who can resist when it comes to The Legend of Zelda? I was such a huge fan of Wind Waker on GameCube that I really had no choice other than to get the premium version of the remake. So exactly is inside this exciting looking box? Read on to find out.

This is what you’re paying an extra £15 for. The Ganondorf Figurine comes in his own protective box, and this takes up pretty much all of the space inside the outer packaging. He’s made in China, apparently.

No surprises here. As with other limited edition Nintendo games, for example Skyward Sword, the box also includes a USK rating as well as the usual PEGI. USK is the age rating board in Germany, and including it means Nintendo only has to release one version of the limited edition box in Europe. There’s also a little marking telling you not to sell the game separately, so don’t go and do that. 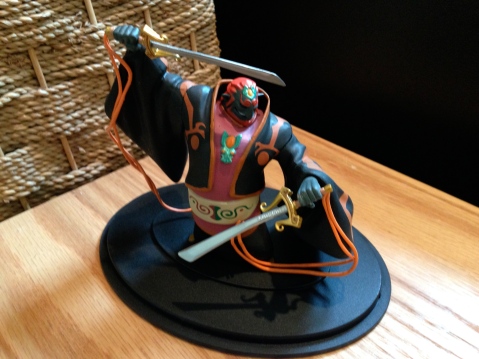 Ganondorf himself looks pretty badass once you get him out of his packaging. He’s got two big swords just like he does in the final boss fight, and some cool orange ribbons that look like they might fall of if you poke them too much.

Ganondorf is not a toy. He comes with a Protective Dome that he must be kept inside at all times. Y’know, to prevent you from having any fun with him whatsoever.

To be fair the dome will keep him from getting dusty, which is pretty good I guess. It seems to fall off quite easily but other than that it’s okay.

As a general rule, Nintendo stuff tends to be pretty collectable and keeps its value well. I bought the Xenoblade Limited Edition (which included a red classic controller) a couple of years ago, and already they’re selling for a high price online. I’m sure that this version of Wind Waker will go the same way, especially considering that the standard version on GameCube has been selling well for years. Usually I’m not a huge fan of limited editions, but this version of Wind Waker feels like a proper collector’s item, and if you’re a fan of the game then I’d definitely recommend this item. 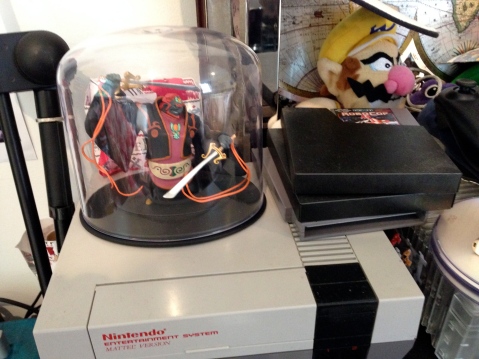 These days I don’t have as much space for my games and collectables as I’d really like, but luckily have found a great spot for Ganandorf on top of the NES.